Today afternoon I saw ‘Five Point Someone’, a play based on Chetan Bhagat’s bestseller. It was staged by Chennai based theatre group Evam at Chowdaiah Memorial Hall. The play was adapted and directed by Nikhila Kesavan.

When I was a going thru www.newindpress.com yesterday, ‘Five point someone at Chowdaiah’ article caught my attention. Immediately I blocked the tickets for 4 people at www.evam.in. I blocked Rs. 250 ticket, as Rs. 100 tickets were not available. Next step was to call my friends. Many of them were busy, some were busy reading the latest Harry Potter book and others gave lame excuses. Tassa disagreed to come saying Rs. 250 for a play is too much, instead he proposed to go for a movie. In one way he was right why to pay Rs.250 for a play based on a book which costs Rs.95. But, in my opinion reading book and seeing a play based on a book are completely different things. Finally after all kinds of brainstorming, I decided go alone for 3.30 pm show, as I didn't wanted to do the dirty job of convincing.

Rs. 250 ticket
At the venue there was a big crowd dominated by minus 25 people, which is unusual for a theater play. Since the theme was very contemporary, such a crowd was not a surprise.

The play started after a 20 minutes delay. There was an introductory announcement mentioning that this played is staged for first time and duration will be 120 minutes, with no interval. Then they announced that Chetan Bhagat is also with us to see the play. The author stood up and waved the audience. The environment was like premier of a movie.

Coming to the play, I was seeing a play after a long time. Last one was Snow-white and Cinderella at Ravindra kalakshetra. Therefore I cannot comment much about technical aspects. The play was very much loyal to the book. Majority of the sequences in the book were enacted. They even enacted prologue too, it was bit modified. In my opinion this was unnecessary. Some sequences which were outside IIT campus i.e. ‘Alok’s house’, ‘Movie hall’ were skipped using monologues and also by ‘Author Narration’ done by S Vidyuth. Most of the times, he was carrying an ‘Apple Macbook’, don’t know what’s the real reason behind this?

I was very curious, how Operation Pendulum sequence will be enacted especially when Hari[Abhijeet Mohanty] goes to Neha’s[Uttara Krishnadas] house to steal the keys .(pg. 170 in the book). Actually, it was enacted very sensible manner. 10 out of 10 to the playrighter.

Of all the characters I liked Alok[Sarvesh Sridhar]. I expected this character to be most boring of all, but Sarvesh brought the house down showing his talent by enacting various emotions(mostly frustration) of Alok. Many of his dialogues received applause from the audience.

After the end of the play, director gave credits to actor, technicians. Then she invited on stage Chetan Bhagat, the man who created these characters. She thanked him for granting permission for the adaptation. 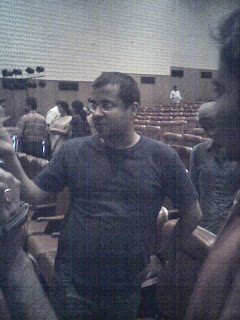 Chetan Bhagat - answering queries
Chetan Bhagat complemented the team by saying the play was staged with absolute dexterity. He also appreciated the way in which 4 years story was enacted in 2 hours using a single stage. He concluded by saying that these kind of plays based on contemporary themes will definitely revive theater in India. Also, this play should be staged in other parts of India as well(other than Bangalore and Chennai).

After the show I got a call from an unknown number. It was Abhishek S. N, he had got my number from my friend Yashas. We two had already discussed about the play in the morning and he was going for 7.30 pm show. It was nice to meet a person face to face after a long time especially with whom one regularly chat online. We discussed about our work, blogging, forthcoming kannada movies and the projects for which Abhishek is designing the posters.