Happy Independence Day! Just wanted to share a observation of the day. I don't want make any judgment here but just want to share a thought. Looking at the status messages of my friends/colleagues today, I feel that patriotism of a person towards his country will be more when he/she is outside his/her homeland. May be a obvious point but today's observation confirmed it. Most of the status messages of my friends in videsh had an indication towards India's Independence Day which was not the case with my friends in India with one or two exceptions.

Here are a few snapshot of gtalk status messages of some friends/colleagues outside India.

Sudhir aka Ski: present coordinates - Arizona State University. A panta for keeping spoofed status messages, had a simple status message for the day. 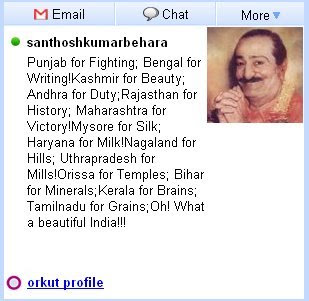 Similar messages were absent from my friend's status who are in India at present. What's the real reason ... Any comments ?

[I have erased out e-mail id in snapshot for security reasons]
at Friday, August 15, 2008