Big Banyan Tree or Dodda Alada Mara is one of the nearest destination to Bengaluru for a day trip. But inspite of close proximity I had never had been to this place and it remained on my 'to-visit list' for a long time. The visit materialized when Harish Malleshappa organized a bike -trip last Saturday(June 7th). For the trip the other people on board were Rohit(Roti), Jatin, Subhajit, Nagesh, Sanjay, Manohar, Raghvendra, SaiSudha and Raveesh.

On Mysore Road take a deviation to the right at Kumbalagod junction(right after Raja Rajeshwari Dental College). Proceed 7 kms to reach the base of Banyan tree canopy.

There is an alternate route from Magadi Road, not sure about condition of roads.

Our plan was meet at a KSTDC hotel next to Banyan tree. I picked up Raveesh at Mysore Road - Ring Road Junction(Nayadahalli) and proceeded towards the destination. The ride was very comfortable thanks to excellent condition of Mysore Road. 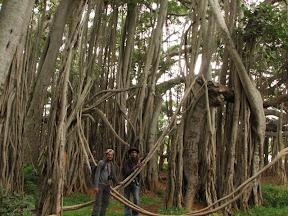 We reached the destination around 8.30 am. Our meeting point - KSTDC hotel was no longer a landmark as it was closed long time back. While waiting other people to arrive we had brief photography session inside the park(canopy of banyan trees). In between we paused the photography session and had breakfast(Idly and Pakoda) at a small hotel opposite to the park. Later, the photography session resumed after the breakfast. We captured the cluster of trees in every possible perspective and many of us made sure to have portrait(read matrimonial) photographs with canopy in background.

Next destination was Manchinabele backwaters which is 8km from the banyan tree. The road was in horrible condtion since it was being laid afresh. On the way we came across a upcoming structure besides a big dish antenna. It seemed like an hi-fi center and from enquiry we came to know that the place is going to be monitoring center ISRO's Chandrayaan.

While approaching Machinabele we had photo sessions at many points. At one point on a rocky formation next to the reservoir we had snacks. 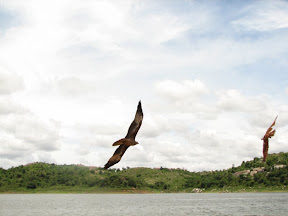 Next we proceeded towards the army training camp. A little distance away from that was the bank of the backwaters. At the backwater bank we witnessed a group of 7-8 eagles doing some continuous acrobatic stunts(one-by-one) to a catch fish. Capturing this behaviour turned out to be a challenge to all the photography enthusiast among us. The challenge session went on for more than half an hour.

In between many of us except Raveesh, Subhajit and me proceeded ahead. We three after finishing the eagle-photo-session looked for other people. But no one was in the sight and there was no network coverage to know their whereabouts. We could spot only Jatin and he too was not sure about other people. We waited and waited in a shade and in order to pass-the-time we tried out some macro-mode photography experiments by capturing a caterpillar.

When myself and Raveesh were about to start the return ride, missing people(Harish, Nagesh etc) appeared. They had got into water for bathing and met with a little freak incident. The misadventure happened when someone while trying a swimming stroke lost the control and panicked. In the process three people had almost got drown. By god's grace everyone were back fit and fine.

Before starting return ride we went to other side of the reservoir had a glance at front-view of the dam and took photographs too. Then, our plan was to have lunch at some hotel in Mysore road. Later we dropped the lunch plan after having Yell-Neeru in front of Banyan tree. 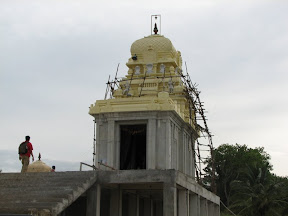 On the way back we offered prayers at Mukthi Naga temple. The temple has a 12 feet tall, 36 tonne in weight Naga monolith. To quench our curiosity about the place we posted query to the pujari. He asked us to do nine pradakshane of the enclosed nagara hutta in front of the temple. After doing the rounds we came back to temple and one the temple's caretaker narrated the story. It was something like this - 200 years ago some enthusiastic person (a illiterate) used to meditate at the same place. While meditating cobras from nearby pit(hutta) used to come besides him. On account of having this great power, the person became famoush and used to do nagara dosha bhanga for affected people. Fast forward... 20 years back, someone rich person had bought the present land. In spite of lot of efforts he could not cultivate on the land. Then the rich person contacted a reknowned astrologer Subramanya shastri. When the Shastriji came to the place, the cobras reappeared. On observing this Shastriji declared place as a holy place and advised the rich person to construct temple at the same place and the resultant was Mukthi Naga temple.

Return ride
After Naga darshan we continued our return ride. As soon we stepped into Bangalore zone(right after 'welcome to Bangalore' board) we experienced the traffic congestion. The city is definitely blessed with traffic! Wading through the congestion I dropped Raveesh at Nayadahalli and came ck to home concluding the trip. It was a small trip from duration perspective and the ride duration was shorter than my daily journey to my office!
at Sunday, June 08, 2008