Think Twice before watching a Remake

Today we the members/promoters of AAG group ( Sudhir(Ski), Shreesh, Gautam Garg(GG) & me) decided to go for a movie in afternoon, instead of going for a lunch outside office.

We had not many options, there were two new releases were Bhool Bhulaiyaa(BB) and Laga Chunari Me Dag. After sufficient discussion we decided go for BB, remake of a Malayalam movie Manichitrathazhu. The remake/adaptation of the original were successful in Kannada(as AaptaMitra) and Tamil(as Chandramukhi). 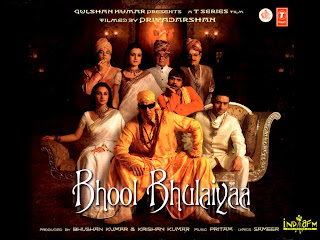 image courtesy indiafm
GG was very much enthusiastic to see the movie and Ski was even more enthusiastic since he is die hard fan of Vidya Balan. But myself and Shreesh were not so enthusiastic, because we had seen Aaptamitra previously.

We got the tickets easily at Innovative Multiplex, even though we reached theater ten minutes before show time. After initial five minutes of the movie Sudhir realized that he has seen some parts of the movie while traveling in Bangalore-Mysore Airavath.

Overall, the movie was watchable thought not outstanding. There were comedy scenes here and there. Some seem to be really forced especially the bathroom-towel sequence. I am still whether confused to call the movie as comedy or suspense thriller.

The screenplay of the movie is not as sensible as that Aaptamitra. The major drawback of the movie(relative to Aaptamitra) is the music. In Aaptamitra the climax song used to linger in ears even 2-3 days after watching the movie, well it's not the same case in BB. The 'Hare Krishna' song which is shown in the promos is not part of screenplay, it comes only in the end i.e. during credits.

Akshay Kumar the 'comedian' brings the house down in many sequences. Viday Balan exhibits all her acting skills in the climax. It's very difficult to reenact the character which is played by talented actress such Soundarya. Rest of the actors "Priyadarshan's Comedian" are watchable.

The movie is not recommended for the people who have already seen Aaptamitra or Chandramukhi, as there is no evident improvisation.