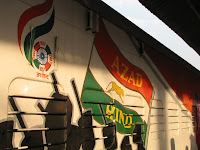 It was usual morning of 26th January. While surfing for TV channels I just had a glance at live telecast of Republic Day parade for a few minutes. I got bored like anything seeing struggling Pratibha Patil saluting the parade besides guest of honour Sarkozy(without Carla Bruni). Then I thought of going to one of ‘upto 50 % sale’ offer at Jayanagar. At 12 noon, came a call from Raveesh ... What about going to Azadi Express(mobile freedom struggle museum) stationed at Cantonment Railway Station. I immediately agreed and we decided to meet at the venue at 3.30 pm. 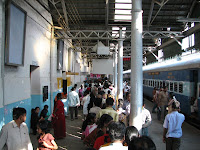 I reached the venue on dot at 3.30 pm. Raveesh along with his cousins Deepika and Babbi (its her nickname) had already reached the venue at 3.20 pm itself. Since it was a holiday I had expected a large crowd at the venue. But it was many folds more than that. There was a queue of 4-5 times length of the train to get on board. The free entry was an additional reason for such a large crowd.

It was obvious that it's going to take more than two hours to get inside the train, many people were discussing about going to a different such as Lalbagh for the flower show. Since I had heard about a lot about this train, we persisted and stood in the queue. The two hours was frustrating courtesy constant unethical intrusion of some people into the queue and honking engines of the passing by trains. We overcame this by discussing about various topics such as photography, movies and blogging. 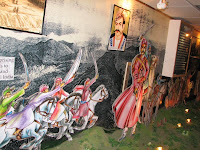 While waiting, there was a frequent announcement that the Azadi Express will be open upto 6 pm. It was 5.30 and still 200 people were in front of us. Near to the entry door the volunteers were bit stricter as they prevented some intrusions. Finally, at 5.59 pm we were inside the train. All the twelve bogies had a different theme. It starts from 1857 war of independence and moves on with subsequent freedom struggle, Gandhijis satyagraha and ends with progress of India since independence and various fields such as science & technology, sports etc. 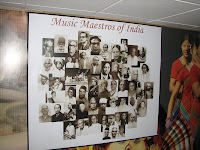 Since we were seeing the stuffs in extra time(after official closing time), the volunteers forced us surf through the depictions. The last coach was dedicated various achievers of India(icons) of India. There were pictures of Sachin, Sania Mirza, Yuraj, Dhoni, Kalpana Chawala and Sunita Williams. What about other people no Amitabh, SRK, Kumble, Dravid. This added to my opinion that the exhibition was biased. According to Raveesh overall the exhibition only good in patches and standing 2 and half hours in a queue was not at all worth (the time).

After the exhibition we went to nearby(1-2km) Sigma mall, there Deepu and Babbi shopped for a while and we concluded the day by doing पेट पूजा at Mc Donalds.

Read the my generic post on this at Bangalore Metblogs and also Raveesh’s post at Ee Prapancha.
at Sunday, January 27, 2008