Gaalipata was one of the most awaited movies of Kannada film industry in recent times. As of the core team of the movie was same as that of most successful movie of the industry - Mungaaru Male, obviously expectations were very high. The hype was built up in a nice way, courtesy marketing team of the movie. 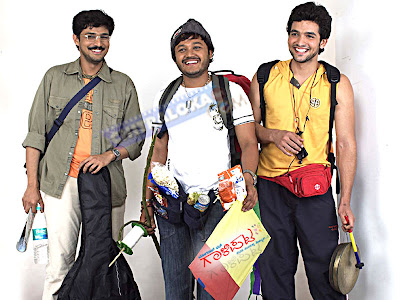 [Image source]
After such hype, getting tickets in the first weekend is an arduous task. Since it was known that the movie is technically is very good and majority of shooting was done in beautious locations of Kodachadri, I thought of seeing the movie in PVR itself. I was continuously waiting for opening of online booking of the tickets in the PVR website from 2 days before release. Unfortunately, the bookings for the movie never opened. Even on Friday morning the movie was not coming in the options for online booking. At 12 noon when I checked website again, the Gaalipata option came in combo-box, but the tickets were sold out. This is very unfair indeed, and illustrates one more example for lack transparency with respect to booking of tickets in PVR.

Now we had look forward to single screen. As we(Harsha, raveesh & me) didn’t want to waste our time standing in the queue, hence decided to go for tickets in black if it is available at a reasonable price. On Saturday morning as per the plan we met at Eshwari theatre at 10 am. The tickets for the morning were sold out by that time, so we hunted for the people selling tickets in black. After all searching we got a man selling the tickets at three times the actual price. As we had no other option we unanimously agreed for his deal.

The show was supposed to start at 11.15 am, we went casually inside the hall ten minutes before the start. But we had to rush to our seats as the movie had already started, the title song ‘Akaasha ishte yaakideyo’ was getting screened.

The movie is about three friends Ganesh, Digant and Kitty frustrated with city life, this decide go away from city for peace of mind. The place they chose is ancestor house of Digant in Muglipete somewhere in Sahyadris. From there on, audience are treated with many clichés and stereotypes such as The major USP of Mugaaru Male was its unique treatment and absence of stereotypes. I am sorry Yograj Bhat avare, in Gaalipata you have taken a few plusses of Mungaaru male but packaged it with many stereotypes. This is what happens when one tries to emulates success.

It’s unfair to compare the movie with Mungaaru Male, but it is inevitable as there are many similarities.
The movie could have been better if all the departments had blended together seamlessly, as it was in Mungaaru Male. But in Gaalipata some stuffs such as cinematography and comedy stand out very evidently. Overall it’s a watchable movie, but not worth the hype.