In between my hectic work schedule at Paris, I just had a look at news-feed of indiafm.com. In one of items it was mentioned that Shah Rukh Khan(SRK) had come to Paris for inaugurating his wax statue at Grevin mueseum. According museum's site SRK had taken some timeout from his IPL schedule and fulfilled his promise to visit the Wax museum. As soon as reading the news the place got added to my 'to-visit' list. The visit got materialized on May 8th(national holiday in Paris) with Hussu and Gaurav Jain. 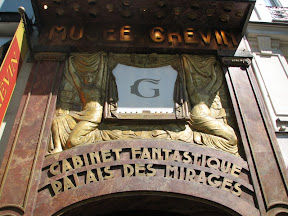 Museum Entrace
The entry fee was 18.5 Euros ... double the fee of Louvre museum! For a while we thought of skipping the museum but decided against it as we won't coming to Paris every other day. The first section of museum was 'Hall of Mirrors', there we witnessed a light and audio show for 10 minutes. It was really presented in a creative way. 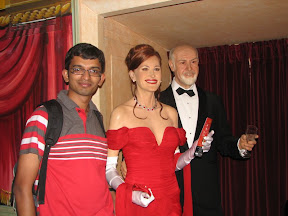 With Julia Roberts and Sean Connery
After the light show from the adjacent hall, the statue-darshan started. First we came across statues of Bruce Willis, Arnold Schwarzenegger, Julia Roberts and also of Elton John playing piano. Then we came across a mini-audi in which there were statues of some French personalities. The only noted personality in the hall was Jackie Chan. In the hall one hilarious thing happened. In a few chair some sitting statues were placed. In order to take rest Hussu sat in between the two statues and unknowingly mirroring the pose of one of the statues next to him. A group of european tourist thought Hussu also as a wax statue. All of them burst into laughter as soon as they realised that Hussu is a human! 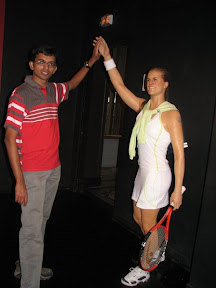 Amelie Mauresmo
In the subsequent halls we came across statues of Sports Personalities such as Michael Schumacher, Amelie Mauresmo, Zidane. Arstist such as Da Vinci, Picasso. Political head of states such as Sarkozy, Bush and also of French astrologer Nostradamus. In between the hall some scenes of Frecnh history - French revolution, Battle of Waterloo were depicted. 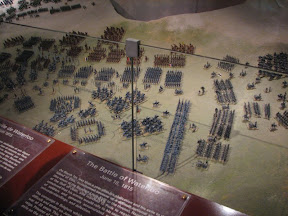 Battle of Waterloo
Three people with three cameras became really irritating as each one of us was particular of getting a snap in his own camera. Also Gaurav was very mush particular for getting his snap in such and such a compostion. He had some no-so-good camera and it made my job even more miserable.


Lastly we entered a big hall and in the beginning of there was a statue of Mahatma Gandhi. In the same hall other prominent statues were of Marlyn Monroe, Charles de Gaulle, Michael Jackson, Pele, Albert Einstein. we though where is Shah Rukh Khan ? Since the statue was recently inaugrated it was placed in the one of special subsection. In first impression the statue was not as sensible as per our expectations. The long hairs made it look more artificial. Next to statue there was a LCD and in which Om Shanti Om movie was getting played. We had a brief photo session standing next to the statue. I was indeed a mission accomplishment for us. 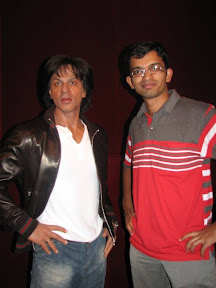 with Shah Rukh Khan
In level-1 of the same hall there was a section dedicated to illustrate the process of making wax-statue through charts, photos and videos. Finally before leaving the hall we had one last glance at the statues especially of SRK.

Thus the visit to Grevin Muesuem came to end. The visit was a different experience but 18.5 Euros really expensive if we take into account the variety of personalities on display. From different angle, the visit made me realise that I am taller than many famous personalities !
at Thursday, June 05, 2008