Thumbs Up to Rock On! 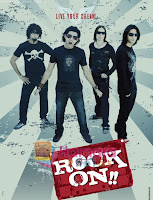 Yesterday morning Seena pinged me "How aboout going to 'Rock On' tonight". Not being updated about movies in recent times, my immediate reaction was "What's that?". He convinced me somehow to come for his movie plan. I suggested him to wait for reviews till afternoon. We found one of the rediff reviews which rated the movie 4 stars and immediately Seena booked night show tickets at Urvashi Cinemas using bookmyshow.com.

The plot of the movie is about a desi rock band 'Magik' and its team members, their high and lows in life involving clash of egos etc. Aditya[Farhan] is lead vocalist, Joe[Rampal] is lead guitarist, Rob[Luke] is keyboard specialist, KD[Purab Kohli] is drummer.

Fast forward 10 years ... the band is no more. The individuals are in different roles Aditya is an I-Banker, Joe is a freelance singer, Rob is an assitant composer and KD is involved in his family(Gujju) business. Aditya's wife Sakshi[Prachi Desai] gets know about her husband's past and plans a together for the band members. Will they get together? Will they perform again ? Go and watch the movie.

The USP of the movie is its screenplay. The two storylines 10 years apart are presented in alternate chapters. While watching one doesn't feel the break in narrative, flashbacks are at the right moment.

In performance area there are many surprises. First in the list is Farhan Akthar. He is very effective being in front of the camera . Arjun Rampal dominates the screen with his expressions/body language in key moments. Purab Kohli(from Mahesh Bhatt factory) rocks the entire movie with his coming timing. Prachi Desai who previously used to come in one of the Balaji Telefilm soaps does justice to her role.

The soul of the movie is its music composed by Shankar-Ehsan-Loy. I can't comment much on it, since I am not a hardcore music enthusiast.

There are many signature moments in the movie, my favorite was Magik performing a old Hindi movie song "Saso ki zarurat aise" at a Dandia party for monetary benefit. A very hilarious sequence indeed.

What others say:
Indiafm: Taran Adarsh's review: 4 stars:
On the whole, ROCK ON!! is an amazing experience. The highpoint is the emotional quotient, the skilful performances and the superb execution of the subject.
CNN-IBN: Masand's Verdict: 3 stars:
The film isn't great, far from it actually. It's watchable because it's set in a new world, and because it's got a bunch of wonderful moments. Watch it because it at least tries to be different.
at Saturday, August 30, 2008