Not a blog posts so many days? The reason is, I am in Korea for second time. Came here two weeks back, but unlike previous trip this time I don't have sufficient time to blog. Today somehow made time to compose this post.

In my opinion visiting any foreign country for second time is somehow boring. The curiosity factor won't be there to create enthusiasm. But for me there a few differences relative to my first trip. One of them is that I am staying in Seoul(Gumi in previous trip) and other one was that I traveled by Singapore Airlines.

Singapore Air experience:
There is something in this Airlines that makes it unique. I was delighted to see the menu card given on board Bangalore-Singapore flight was both in English and Kannada(vernacular language). A feature which is absent even in many domestic flights. And also food quality was above average, even in Singapore-Seoul flight. 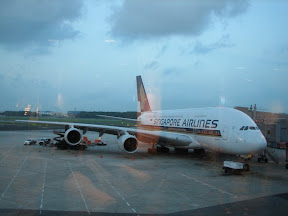 At Singapore:
When I had a transit at Singapore, the airport was getting set for forthcoming for Formula-1 race. There were a few dedicated merchandise shops of BMW, Ferrari alongside duty free shops. In fact half the contents of in-flight magazine had write ups about the first Formula-1 night race.
Before leaving from Bangalore I had a wish of seeing an A380 aircraft at the Singapore airport. The wish turned into reality when I witnessed the majestic plan parked at adjacent departure gate of my Singapore-Seoul flight. First impression: the plane was not as big as I expected!

Taxi ride from Incheon to Co-op Residence
As soon as coming out of Incheon airport, a taxi driver approached me. I said 'White taxi', he said yes and took my trolley towards his vehicle far away. After reaching to his vehicle I realised that he had an expensive 'Black taxi'. Since I was far off from the terminal didn't any other option to get into his car. The vehicle was luxurious but the driver had not switched on the AC. For making the interiors cool he used to open power windows slightly at regular intervals. What a cheat! that too in a country like Korea. After a while I had a look at the meter it was racing towards 100000 Won, even half the distance was not covered. I had kept not much cash since the fare in white taxi was supposed to be around 125000. I immediately told him that I don't have much cash. I used to all the Korean phrases I knew to convey him that I am not new to the place. And also told him you are cheat etc. After argument we had a deal for a fare of 150000 won ignoring the meter's fare.

Before concluding the post, I wanted to discuss the following point.

Trade offs associated:
With onsite assignment there are trade offs, there are monetary benefits etc but one has to manage with loss of many priceless things. I had to drop out of Srindhi's ISO:14001 planned Wayanad trip in last moment. The trip was on the weekend I was flying. Also I missed Ctrl-Esc Group's outing to Innovative Film City. But there is a old saying that in my life things evens out. Today evening I witnessed Seoul International Fireworks festival at Yeouido. Read more about in a dedicated post.
at Saturday, October 04, 2008