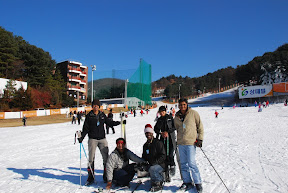 This is a trackback post, an account on Skiing excursion I had in Korea. The build up to the trip was amusing and dramatic, so sharing the experiences in detail.

In first week of Decemeber 2008, the desire to do skiing was ignited from a brochure of Yangpyung Resort kept in the lobby of Co-op Residence. Initially we were planning to opt for 'just enjoy snow' package of 45000 Won. After a few rounds of discussions we thought "Why not Skiing ?". But unfortunately the packages for Skiing mentioned in the brochure were bit expensive (cost starting from 80000 Won per head). So we were about to take a plunge for 45000 package. And also we were not very keen to create embarrassment in the resort, being a 'L-board' in skiing. But with the arrival of Rama on Friday (Dec-12th) equations changed. Since Rama had a prior experience of skiing in Korea at Jisan resort, we got a little confidence and decided to go on our own as the expected expenses were very less compared to conducted trip.

To get there:
- Distance: An hour journey from Seoul.
- Economical mode of transport is by resort shuttle.

Here are chronology of events happened before we actually step our foot in the resort.

Saturday Dec-13 3 pm: We were bit reluctant to do skiing on our own and were having a brainstorming session. Our confidence level changed when Rama agreed to accompany us. First we called 'Jisan Resort' customer care. A lady picked up the phone on other side. According to her there was no shuttle facility to the resort(Not sure whether the shuttle was not there or it was fully booked). As per her information one had to visit the resort only by personal transport.

3.15 pm: With little disappointment we looked for options. But it was difficult to get details info thru google as majority of content was in Korean. I contacted Norix (co-worker at LGE) on gtalk requesting for alternatives to Jisan Resort. He suggested us 'Bearstown Ski Resort' and gave us details regarding shuttle timings, pick-up points and also contact number of the resort.

4.00 pm: After getting info I had a brief discussion with Santosh and Manoj. The details didn't look convincing as the boarding point was at Euljiro(near Jamsil) at 8 am. It was very difficult to get up early in winter morning and reach a place far from our hotel. Also Santosh was not showing his usual enthusiasm as he was more concerned about booking a 'Tatkal ticket' for a train journey he was supposed to make in India after 6 days.

5.00 pm: I called up Bearstown resort, but unfortunately English speaking correspondent was not their in his/her seat. The person who attended the call, asked me to call after 30 minutes.

5.30 pm: We went outside to Yongsan market. While traveling in the subway, I called Bearstown again and the English speaking correspondent(Su Yang) picked the phone. But due to noisy environment I could not discuss with him properly. And he was not agreeing to give me pick up points of shuttle near our hotel, stating the reason that reservation for shuttle should have been done before 12 noon.

6.30 pm: Shweta who chose to rest at hotel that evening called me asking for the status of skiing trip. I explained her about the situation and gave the contact number of number of Su Yang, to get as much details possible.

8.00 pm: Later at Yongsan train station I tried to get info from a lady seated in the tourist information center. Initially she resisted saying that it's not her duty. Then somehow I convinced her to call the Bearstown resort to get details about the shuttle. But unfortunately she could not get much additional information.

8.30 pm: When we were on the way back to co-op, I called Shweta regarding her enquiry updates. It was very delighting to know that she had managed to get shuttle information including pick up points near our hotel, timings (7:20 am) and also number of the bus. But she had noted down pick up points which were dictated over phone and the names were bit confusing and were not precise.

11.30 pm: We went to co-op reception for help. They called up the resort but no one was there to attend the call. So we thought of confirming boarding points in morning before leaving (around 7 am). Also we requested the reception to give wake up call at 5.30 am

Sunday Dec 14th, 5.30 am: We got up after a wake up call from the reception. But the process of getting up very early in core winter season turned out to be tedious. The energy levels were down to minimum at sub zero temperature.

7 am: Somehow we got ready and went to reception for confirming the pick up point. The reception lady called up Su Yang and looked in a internet page for shuttle pick-up points. The nearest boarding points were Mopko at 7.10 am and Yendeungpo 7.15 am. Since we had to rush to the pick-up point, I requested the receptionist to arrange a taxi from co-op upto boarding point. I hurried back to the room and asked Manoj to preempt his Maggi preparation.

7.10 am: Taxi was ready. Myself and Shwetha were at the reception but Santosh(i), Manoj and Rama were still on the way. Since we were not sure of making to the nearest pick up point by 7.15 am, we asked the receptionist regarding next pick up point of the same shuttle. She wrote down the details "7.30 am Yeuido" (in Korean) in a post-it slip.

7.15 am: Santosh(i) and Manoj came but Rama went to the basement for withdrawing cash without hearing from us about the hyper time constraint. Whether this blunder from Rama cost us ? Read on ...

7.20 am: Rama came back with two unsuccessful attempts of withdrawing cash. We didn't even have the time to argue. Immediately we got into the taxi and asked the driver take us to Yeuido in 10 minutes! Taxi driver who incidentally was Santosh's friend argued for while for 5 passengers but understanding the situation he didn't raised any major objection. The ride to Yeoudio was extremely thrilling. The thoughts of missing the shuttle already the coming to our mind.

7.31 am: We were at Yeuido bus stand. We thought that the shuttle had already left. But in 1 minute a bus came from behind and stopped at the stand. It was not usual Seoul City Bus so we expected it to be resort bus. Shweta asked the driver is it the bus for Bearstown resort ? Yes was his reply ... We could not believe our luck since we got the shuttle inspite of minor blunders !! Okay enough of emotions and we got into the bus all set for Bearstown excursion. 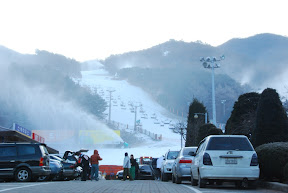 After 1 hour journey we arrived at the resort. As expected the temperature at the place was less relative to Seoul and infact it was -8 degree celcius. The landscape view of the resort was dominated by slow slopes being prepared by machines(sprinkling artifical snow) and air-lift trolleys besides the slopes.

Now we were at the resort, the million dollar question was "How to proceed ?". We observered many enthusiatic Koreans taking out loads of equipments from their car's bootspace. Without having any clues we went to the information center and explained about our zero skiing skills at the information center. A guy sitting on extreme right responded to our concern and took us towards the ticket counter. And that guy was Su Yang itself. Nice gesture from him as he helped us beyond his duties. 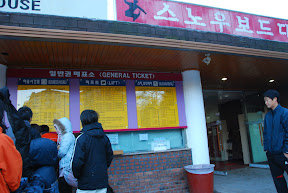 Tickets we had to buy separately for entry and equipment. For Entry ticket there were options too... 29000 for half day and 41000 for full day. Considering our endurance levels we thought it would be too heavy for us spend entire day skiing. so we chose to opt for half day ( 9 am to 12.30 pm). Then for hiring equipment there was discussion among ourselves to hire for only 3 people and share. I overpowered everyone and decided to go for 5 equipments (4 skiing and 1 snow board) why to do "conjusi" of 10K each for equipment when we are already spending 29K for entry. The equipments turned out be more heavier than our expectations. Forgot about wearing, it was even difficult to carry them. Somehow we managed to wear them. But the million won question .. where to do skiing ? Where's the beginners slope ? We called Suyang again for help and he agreed help us in things which were beyond his duties. He took us to snow area and asked to ski :). Santosh asked Sun Yang a basic question. U know skiing very well ? Su Yang replied "I dont know Skiing". What an irony ? We were learning skiing from a person who didn't know skiing :) Next in the line was process of wearing sticks, it turned out to be an ardous task. While wearing stick itself one can experience the slipperiness of the surface. Su Yang assistance was very much helpful as he literally held our hands while wearing sticks. 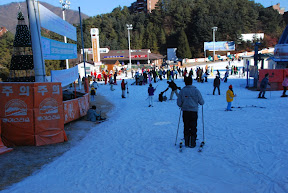 Now the highlight of the day, our first attempt of skiing. In our group it was Manoj who made the first attempt and as expected he fell down after proceeding ahead for a few meters. Rest of us could not control laughter. Same happened with santosh(i) and he was struggling to get up. Then it was my attempt and obviously I too fell down unable to control the slipperiness. But getting up was even more difficult I tried and tried to get up wearing the sticks. But later took help of a Korean to get up.

Later Su Yang took us to actual beginners slope and took a leave as he had to continue regular duties. We had carried our camera so were regularly having photo sessions. Slowly and steadily we got used to slipperiness. But the difficult part was getting up after a fall. Also I turned out to be unlucky many a times to get an obstruction either from a kid or some girl and once I was skiing rhythmically without any obstruction, but the stick itself came out. 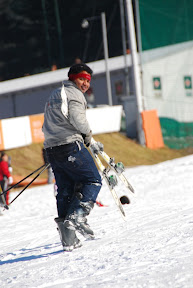 The major highlight of the skiing session was Santosh giving Chiranjeevi style poses during photo sessions. Rama was regularly taking breaks as he was very flexible using snowboard. wearing skiing equipment it is difficult to move around normally. At 12.30 pm we wound up the session finishing of our first date with skiing.

After returning our equipment, we spent half an hour in front of heater, just to dry our wet clothes. Then for lunch there was a food court. Being lone veggie in the group I was in trouble as usual. I had no option had to eat only french fries at KFC. Then after so called lunch we thought seeing places around the resort since our shuttle was at 5 pm. We didn't find anything amusing. Since the shuttle was 5 pm. In order to do timepass we had photo sessions here and there and we got bored with that too we came back to the food court and sat at a place doing chatting n chatting. Rama narrated his one month dramatic story w.r.t onsites and visa rejections. 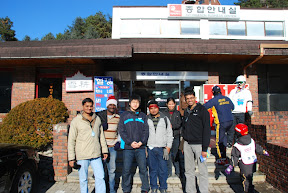 At 5 pm we came out saying thanks a ton to Su Yang. Just imagine if a person in India had helped liked this how much would have been his expectations regarding monetary tips. The shuttle started the return journey on dot at 5 pm. All of us had a nap to overcome sleep deprivation due to early rise. At 7.30 pm, we got down at a drop point near to Yangpyeong and walked upto our Co-op hotel concluding our fun-filled skiing excursion with pinches of dramatic moments.