"Career in these times" - Harsha Bhogle 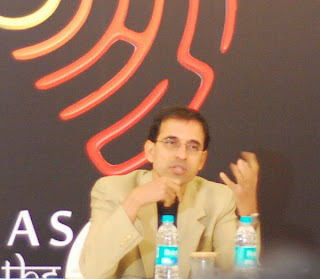 Renowned cricket commentator and journalist Harsha Bhogle was invited to SPJIMR campus on 14-Feb-09 to share his opinion on “Career in these times” . The inspiring talk was part of institute’s maiden business fest OJAS. The speech was packaged with Harsha’s usual spontaneity, sense of humour, innumerable references to cricket(sports) and other aspects of life. One of the humour was a self directed comment on his new hairstyle after hair implantation.

Following are excerpts from the speech. (in some lines I have used second person directly to share the phrases/words as it was delivered by Harsha)

Howz the current situation ?
Before economic meltdown an individual who was earning Rs 100 per day and was saving Rs 50 per day. But due to excessive greediness, the person was spending Rs. 110 (on credit) on same day thinking that he/she will save Rs 50 tomorrow. Now the current situation is the same individual spends Rs.50 for basic needs and then he spends Rs.45 on luxury stuffs and finally end up saving Rs.5 ! So the situation is not so terrible.

What’s the advantage ?
Every situation can be looked in different views. Crisis is bad for many but it’s good for some. The current situation can be compared to a batsman making his test debut at No.6 position. His turn comes when 4 wickets are down, 2 runs are on board, on a seaming pitch, under overcast conditions! It’s a fantastic opportunity for a debutant to prove himself. But things were different in job market 1-2 years ago, which can be compared to a debutant coming bat when the score is 250-4 on a flat pitch. If tough times come early in life, one won’t be pampered like it’s done usually in good times. Being more solid, you will be mentally prepared for every tough situation in future.

Shortcuts in Life ?
The moment you see an empty parking space in Mumbai you should think that there’s something wrong. One should hang-on and evaluate why someone else has not taken the shortcut. This kind of evaluation was not done by B-school passouts a year ago, and decided their career on salary, prioritizing money above a job which had more satisfaction and better career growth. Harsha made a point that he’s yet to meet a person with a very good career and simultaneously facing financial problems. There’s life after tomorrow, choice should be created by judgment. If one thinks the salary is less, he/she has to imagine situation in 1985, by whatever method of valuation the minimum salary of current era will be more than an MBA graduate in those times.

Working in teams
The biggest problem corporate India is facing today is that people are unable to work in teams. Only team a person know is his/her laptop. If one has to go up in career first he/she should be a good team player and subsequently should be able to lead a team. Basically, a person is accessed by how good a team player he is, how he understand and relate to other’s problems, but not by how much cash flow or financial ratios he’s aware off. It’s unfortunate that today young people communicate by scraping on books or writing on walls.
Harsha referred to a line he read a few days back “Good coaches coach players, great coaches coach people”.

Getting Hands Dirty.
Today lots of people don’t like to get their hands dirty. One of the problems with management education is that it's creating slots, and graduates go into those slots. It’s nice thing to see that people these days talk about entrepreneurship and social movement etc, irrespective of whether they implement something or not. Some of the best marketing people are the people who work in small towns. So if one gets a great career opportunity he should go for it, a good job early shapes an individual’s career. The reason Hindustan Lever has been producing greatest marketing minds is mainly because of first 2-3 years stint in a small remote town where the managers gets an opportunity to understand the market. So don’t hesitate to get your hands dirty. There’s nothing wrong in starting a career right at the bottom. Never let prestigious degree come in the way of your goal. Prestigious degree does is that you wont know what you really want to know. That’s the sole reason today city boys and girl are getting their pants taken off by small town boys/girls, whether it’s in cricket or getting into IIMs/IITs. They understand India better and they have been getting their hands dirty in every area of life.

Bodhgaya – learning from a SriLankan Monk.
Harsha also shared experience of meeting a SriLankan monk a Bodhgaya and learning a few meditation tips from him. The major suggestion from the monk was that an individual should take all things from his mind and focus on one thing. “Maximize your present” is one of the motto of Buddhism. Just give your 100 percent. Never know who is watching, you might be featuring in a small program but someone important person might watch you while switching between channels. Take example of Brad Haddin, if he had scored runs of last two matches a week back, who knows he would be having million dollar offers IPL franchises. Never know what will happen when!

Coaches in Sports
In sports players have become too much dependent on coaches and supporting to this fact is that these days in a team support staff is bigger than playing staff. For example in cricket, if you have a bowling problem you go to a bowling coach, if you have a fielding problem you go to a fielding coach. It’s not the right way to grow in career. It's like a person goes to Mc-Donald and seeks solution for whatever problem he has life. So, don’t be in search for coaches.

Bad times come in real world.
One can’t just say in real world "Ok guys here I am” like star sons usually do. Such people with godfather manage to stay in limelight at most for 1-2 years and ultimately disappear. Every successful person has been through a bad phase including Himesh Reshamiya ! ( burst of laughter from the audience).

Fitness and health.
B-school should teach an individual about fitness, diet and health. These days a norm is a B-school is that sleeping for 4 hours is ‘way to greatness’. There’s so much glamour associated with sleeping less. There are so many misconceptions. Unless one won’t have a puff he won’t get a great idea. For some people Rum has become a ‘must have’ to put themselves in right mood. Bottom-line is that if one can’t take care of his health, how other people will have confidence in him? Focus doesn’t means obsessed with health. World is beyond inches of biceps or whatever number of packs!

Other stuffs.
- Keep reading good things and always challenge whatever you are reading.
- There’s no need to watch news channel because in two months as they will be taking about only politics and IPL.
- Greatest best time in the world to be a young Indian. Five year from now you will value that the current situation was tough.

Q&A session.
After the talk Harsha opened the house for questions and sincerely requested audience to avoid questions like “Why Dhaval kulkarni was not picked” or “ Why Krish Srikanth is biased towards players from Chennai ”

A few major questions
- What’s ur opinion on peer pressure? .... “No harm being better than someone else. But in process you may forget you own strengths”.
- Is it difficult to maintain spontaneity speaking to a billion people ? ....“I just speak to lens, however I behave in such a way that I have actually entered viewer’s home.”
- Has IIM-A tag helped you in moving ahead in career ? .... “Not always, but sometimes it has helped a lot”.

The other questions were on regarding sharing experiences with fellow commentators and in the end there were a few stereotypical questions “How do you rate Dhoni as leader?”, “Do you believe in faith and destiny?”.

The special session was concluded by breakthrough vote-of-thanks speech by SD.
at Sunday, February 22, 2009