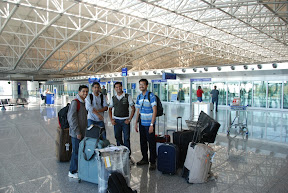 Update after a long time ... at present I am at ESB Reutlingen(Germany) for students exchange program and also for an academic project with the team 5S - Sandeep, Sameer, Sachin, Sivaram and Sankar.

Getting to Reutlingen:
Traveling aboard as a student is a different experience altogether, especially for people who have traveled abroad by business trips. Everything has to be done on your own, right from visa application & air-tickets bookings to insurance and forex. Thankfully we got a good deal in Emirates which has kept our expenses under control so far ! The air travel was good, but getting to Reutlingen from Frankfurt was sort of a pain, even though we covered major part of journey through ICE. We had carry to carry our big baggages in the train which are meant for Regional travel.

German Language and Culture Course:
It's the very first course of the exchange program. After the initial bouncer of surprise test the german language skills, the course has been amusing so far. Our faculty is using nice pedagogy to teach. She has already taught us a German song and some sessions she is asking us to enact a situation in a pair. A very good way for internalizing a language. 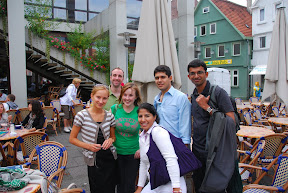 One of the activity in German language course was Reutlingen treasure hunt. 120 students were divided into teams, ensuring that each team has members of varying level of german language expertise. The teams were given a treasure hunt questionnaire( in German) and which was supposed to be filled by exploring landmarks of Reutligen downtown. Being a beginner in the language, I could not really contribute to the group initially. Amazing part of the activity was the team-diversity in the team an Indian, an Russian, an American, Mexicans, a Irish !

There have been several activities in the course. Last Saturday(5th-Sep) we had one-day excursion to Lake Constance and on Monday(7-Sep) there was guided Reutlingen City Tour.

Celebrating Birthday Overseas.
Last but not the least, I celebrated my first birthday being outside India. First of all there was a confusion whether celebrate at 12 midnight IST or 12 midnight German time. And the signature moment was getting wishes in German in the language course class. Our faculty taught the class german happy birthday song.