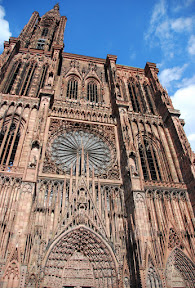 Strasbourg(France) is a city virtually sandwiched between Germany and France and historically has been a disputed piece of land between two countries. The major significance of the city is that Gutenberg created the first printing press in this city, now a seat to major European institutions such as European Parliament, Council of Europe.

Booking tickets:
The process of booking tickets was sort of a mini saga. We were constantly visitng Deutsche Bahn(DB) site for one week to check whether there are any discount offers. Till 2-3 days before the traveling day there wasn’t any breakthrough. Only option available in the site was tickets for 80 Euros per head. We were about to call off the trip, but Sachin and Sivaram didn’t lose hopes and gave a try at DB reservation office at Reutlingen Hbf(central station). They got tickets at the price of 53 EUR for 5 people, a real breakthrough indeed. The ticket was combination of Baddem-Wüttemburg pass and two way ticket from border of Germany to Strasbourg, the option which was not listed in DB site.


Important points
- Buy Strasbourg-Pass for 11.90 EUR. Breakeven can be easily attained in one day.
- People from Germany can travel upto last station of Germany by Baddem-Wüttemburg pass or Happy Weekend pass.
- Take the boat ride first, it's free with Strasbourg-Pass.
Onward Journey:
From Reutlingen, we took very early morning train at 5:47 am to Stuttgart and there at Stuttgart Hbf we had breakfast Brezel + Milch Coffee at 'Yormas' for 2 Euros ! really a cheap and effective option. From Stuttgart we took a train to Freudenstadt Hbf and changed over to another train to reach Strasbourg at 10:34 am. Nearly five hour one-way journey, well you have to sacrifice on time to save money. To be frank the journey was boring and we should have carried some books or playing cards for better utilization of time. However, Sachin and Sameer kept us entertained by narrating a few dramatic incidences from their life. 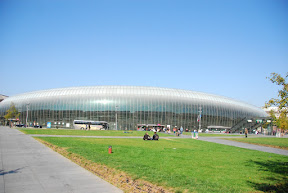 After getting down at the station, we straight away went to the Tourist Information Center in the station premises itself and enquired there about the places which can be covered in a single day. We bought Strasbourg-pass booklet for 11.90 EUR/head. The pass is valid for 3 days and it had many vouchers from which one can avail discount or free entry at many sites in the city. And also for exploring on our own, we bought a city-map for 1 EUR! The first site on our list was Strasbourg Cathedral. We had initial plans of renting bicycle for moving around so we didn’t opt for tram pass immediately. On the way to the cathedral we realized that it’s a sort of headache for a person new to the city to roam around using a map even on foot. So we cancelled the plan of hiring bicycle and instead opted for the tram pass(8 EUR for 3 people).

Cathedral and the Astronomical Clock: 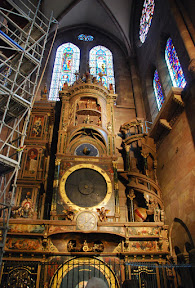 After witnessing 12 noon ceremony at the Cathedral we moved to Astronomical clock section. It’s a huge perpetual clock displaying time, positions sun and moon, solar and lunar eclipses. The major significance of the clock is that at 12.30 pm, twelve life size statues of Apostles move in front of Christ's statue. There was a very big crowd waiting for 12.30 pm to happen and there was hardly any place to sit. Suddenly, an old man in the crowd in a very bad medical state lost his balance, as he was not able to withstand the strain. The man was from England accompanied by his wife and German family friend. Immediately after witnessing the incidence, Sameer called up the emergency number 911 for an ambulance. He was unsuccessful in first attempt as the person on the other side was not speaking in English and in the second attempt he gave the phone to a French lady to request for an ambulance. Within five minutes the emergency team was there on the spot. Kudos to the medical-team and ofcourse to Sameer for showing presence of mind. 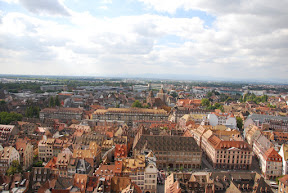 After seeing the astronomical clock, we came outside to ascend the cathedral tower. There’s entry fee for getting to the top, but it was waived off for people with Strasbourg pass. The ticket checker took out corresponding entry voucher from the pass booklet. The ascent by 500+ steps of spiral staircase was very tiresome. Somehow we managed to reach the top of the structure which was world's tallest building from 1647 to 1874[source wikipedia]. From the top, we witnessed almost homogeneous architecture of the city, took some general snaps and descended with dedicated staircase for getting down. After descending from the tower we realized it was time for lunch but we found the cafes around the Münsterplatz(Cathedral area) were very expensive. We were able find a decent shop with affordable rates, there I had french fries for 2.40 EUR and others opted for cheese sandwich etc. 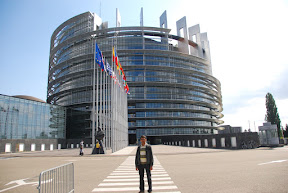 After so called lunch we took a tram from nearest station to Euro parliament. On the map the place looked very far off, but we reached the place within 10-15 minutes. Just to exaggerate one can say the map of Strasbourg is larger than the city! After reaching we just had photo sessions in front of the building and did some timepass by trying to identify flags of Euro member nations.

Next we visited Rhine boathouse(Naviscope). It was on other side of the city and also sufficiently far from the nearest tram station. It was a big mistake getting to the place, apart from being far there was nothing exciting about the boat. It was just small boat with a namesake museum inside it. We didn’t even took a chance by entering inside as the entry fee had only 25% discount with Strasbourg-pass. 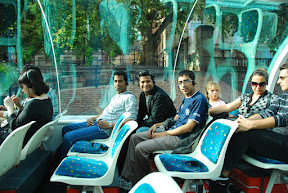 We came back to Münsterplatz(Cathedral area) and decided to take the boat ride which was free with Strasbourg-pass. The commentary on board was very informative. But we were so much tired because of early morning wake up and afternoon roam-around, we were dozing most of times. Should have taken the ride in early part of the trip. One of amusing feature of the boat ride was that there were two levels in the stream. To move the boat from downstream to upstream and vice versa there was a gate shutter mechanism which used to change the water level, in order to elevate the boat from one level to other.

Return Journey:
After the boat-ride we roamed randomly for sometime and came to Station to take the 20:22 train. We were at the station one hour before the scheduled departure and had some bakery items for dinner at Paul’s. Coming early to the station paid off since we managed to get seats in a small train and people who stepped in last had to stand literally for entire journey. The return route was Strasbourg -> Appenweier –> Karlsruhe –> Stuttgart –> Reutlingen. Totally four trains ! Major highlight of the return trip was 'teen-patti' of Sankar, can't rule it out as coincidence as it happened twice in the return journey. Other highlight of return journey was our tickets were checked for first time in the day. Some sort of satisfaction of traveling with tickets, which were booked with lot of efforts.