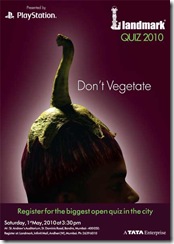 The second edition of Landmark Quiz(mumbai) was conducted at St Andrew’s Audi, Bandra. As always it was a good experience, came across many interesting question and got to know about new facts. Since all of my Mumbai friends were busy with other high priority commitments, my plan was just to witness the quiz as a spectator. But at the venue, organizers didn’t allow me inside as the first priority was for participants and mentioned that spectators will be allowed if there are any free seats left before start of the quiz. Therefore, I decided to form a team on-the-spot to avoid taking any chances and end up missing the quiz. At the registration desk I met a group of two, Puneet Jain(alum of IIMC) and Akash Tiwari(alum of NITIE) who were hunting for a third partner. Without any second thoughts I joined them to form a team.

Some interesting questions which I managed to note down. Have not mentioned the answers so that it turns out to be an interesting read :)