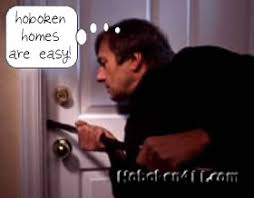 Last Monday when I was about to start my planned work at BLR office, I got an unexpected call from Goldy, the broker who had done the deal for our rented flat in Koparkhairane, Navi Mumbai. He seemed to be very apprehensive about our whereabouts and gave me a shocking news that the door of our apartment was found to be open just-like-that from Sunday morning. For the next five-ten seconds, I just couldn’t believe my ears and then I continued and asked him whether it’s a burglary ? He replied yes by look-of-things and not sure what exactly has been stolen. He requested me to rush to Mumbai asap as my presence is very much required to lodged a FIR.

Without any second thoughts I booked tickets on latest available flights and was off to Mumbai. The total journey time of about 5-6 hrs including to-n-from airport travel was pretty anxious time. I was hoping the loss to be minimum and worried whether my personal laptop and harddisk are safe or not. Also, was wondering throughout the journey how the hell the burglar(s) would have got inside the home.

When I reached home, I straightway went to society’s secretary who had put a temporary lock to our main door and briefed me about proceedings of last 24 hrs. It was shocking to note that the burglar(s) had got into the house by breaking the manual as well as computerized door lock of the main door.  My cupboard lock was also broken in a similar way but thankfully my laptop was safe inside the cupboard and same with my harddisk. Then I checked the drawer which had had an empty wallet atop everything .. in which I had kept some cash for emergency .. later I figured out some amount forex cash in denominations of 20 USD, 10 EUR, 50 SGD and 1000 KRW were missing. It may be worth around 10K INR.

Next day I lodged a FIR at Koparkhairane police station and gave them all exact details of the burglary. The police came to the house, made some report with layout of the house and did some basic enquiry with neighbours and building security.

Some observations and theories:

To conclude, I never thought of writing a blog on this kind of topic one day but decided to share it anyway because things like these can happen to anyone …