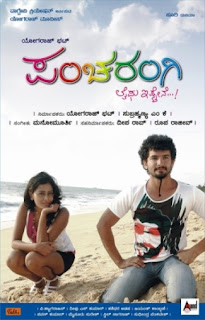 Kannada movie Pancharangi is the latest offering from the Yograj Bhat & Co, the team whose showcase movie Mungaaru Male has been the indsutry’s most successful movie.  Personally for me it was one of the awaited movies in recent times as my college mate Pawan Kumar is the scriptwriter plus supporting actor of the movie. I was regularly following his updates in facebook when the movie was under production.

Coming to the movie, what I can state is that it’s a decent package for family audience segment of Sandalwood. The story revolves around the modern day arranged marriage drama, complexities associated with it and which in turn spawns a new love story in parallel.

I feel that the makers have played safe in many ways by keeping the commercial aspect in mind. Without discussing much about the storyline, I will straightaway jump into my personal likes and dislikes of the movie. I am trying to be as unbiased and frank as possible. Btw, I have not seen Manasaare so my opinion may vary from regular Sandalwood followers.