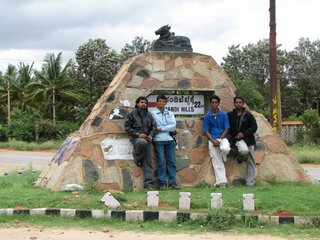 Last weekend I decided to go with my friends on a bike to Nandi Hills. Ande aka Naveen was the initiator and later Vijay(vijaynath) and my colleague Johnson with his friend came on board. Nandi Hills is Vijay's favorite weekend hangout, he usually goes there once in two weeks. Our starting point was 4th block Jayanagar, Johnson with his pillion partner joined us near Hebbal flyover. Then it was the time to cruise towards the destination on our four bikes Karizma, Cbz, Victor and Bullet-Electra. Coordination among us was a big headache since Vijay and Ande were slogging aggresively at 90+ kmph whereas myself and johnson were just going at conservative 60 kmph.


In between, we had a stopover at Hotel Shanthi Sagar next to Devanhalli bus stop. Ande and Vijay had reached there half-an-hour before and had finished their brunch. So myself and Johnson got the food parceled for lunch.

Our next pit stop was Nandi Hills deviation from NH7. We reached there around 12 noon. From there roads were not so good and we experienced the bumpy ride. On the way to hill top we stopped in middle for a photo session. Of all the snaps Ande's snap had very come cool. Vjay exclaimed "If yash chopra sees this he would be definitely taken for Dhoom 3 !!!!". 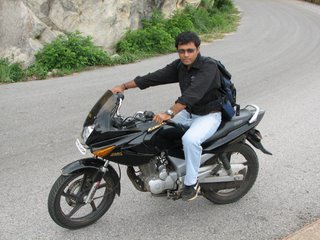 We reached Nandi Hills around 1 pm. As per Vijay if he was alone, he would have reached there by 11.30  am ! After buying enrty and parking tickets we headed for sight seeing. Actually there was nothing great to see in Nandi Hills. First we went to the source of river Arkavathy. After that we went to see famous 'Tippu Drop', from the place where Tippu Sultan used to drop outlaws.

Down hill view was breathtaking and we took many snaps with downhill view as background. Many of turned out to be good candidates for orkut profile snaps. 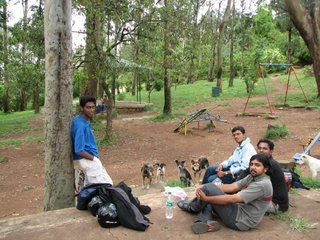 After feeling butterfiles flying in our stomach, we decided to have food which wee got parceled from Devanahalli. In search of a decent place we sat in a park for having food. Actually the place turned out to be quite opposite. Immediately we were surrounded by doggies, who were very desperate to share food with us.

After having food we tried to explore other places. Didn't found anything exciting, so we decided to leave when the time was around 3.00 pm.

While returning we stopped at the same place where we had photo session while going uphill. This time Ande had some snaps with his CBZ bike instead of Vijay's Karizma. After taking sufficient photos we continued return journey. 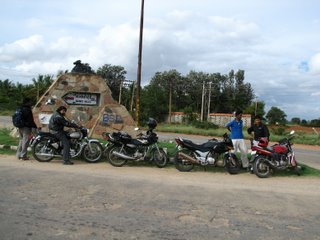 The next pit-stop was at the highway deviation and took snaps in front of Nandi Hills Board with our bikes. We decided that out next stop would be Hebbal flyover. When myself and Johnson reached there, we couldn't sight Vijay and Ande. On giving them a call, we realized they had taken a de-tour via Yehlanka to have some food. And for obvious reasons they were surprised here that we had reached Hebbal. Then we waited for them by having snacks and tea at some hotel near Hebbal flyover. Finally, when Vijay and Ande joined us, we decided to end the trip officially and parted our ways.

It was the end of wonderful Saturday outing. Fortunately, it didn't rain in spite overcast conditions. Otherwise, it would have been a horrible experience.
at Sunday, June 25, 2006