Omkara was much awaited movie for many people. This was due to many reasons good promos, starcast. Trailers were good and had created curiosity in minds of movie buffs. 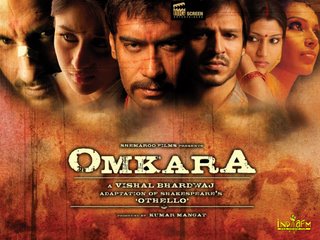 After reading 2-3 reviews (which gave thumbs up for movie) I decided to see movie this weekend itself. As tickets at PVR were sold out a day before release, so only option left for me was Urvashi. I decided to go for night show as I had some personal work till 8pm. Seena and Vijaynath agreed to come. Ande dropped out because of fear that someone might kidnap him if he is outside his house after 10 pm :)

As I entered inside the movie hall there was big awaited change, renovated seats. Now for Rs.60 a movie is really worth watching at Urvashi !!!!.

Lets come to actual topic. Omkara is like normal shakepeare drama, in which humarn traits such as jealousy, suspicion, betrayal are exhibited. Kamar-bandh is almost like character in movie, being part of all steamy scenes. It is also major element for creation of suspicion.

Dialogues have some expletives. some of such dialogues
All critics have appreciated movie. Excerpts from some reviews.

- Taran Adarsh (indiafm) : 2 and 1/2 star.
- Rajeev Masand (cnn-ibn): 3 star
- Lindsay Pereira (rediff): 4 star
I didn't like movie so much, because I had very high expectations after reading thumbs up reviews. Also I had gone for night show, I felt sleepy after 12 midnight :).

Whats your opinion about Omkara. Feel free to post comments.
at Sunday, July 30, 2006