Today there was talk on Hypnotism without Hypnosis by magician turned hypnotist Martin Taylor from Britain at State Youth Center(next to RBI). Got to know about this talk in sunday's workshop where Martin was a guest. I didnt really had any expectations about this talk, so called only a few friends Ski, Ande. Only Ande turned up finally. 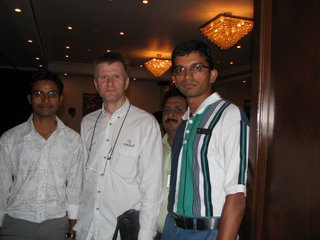 Martin started with introdcution to Hypnosis. He gave shock to all by saying there is no such thing called Hypnosis. There is no altered state(taking people to unconcious, sleeping or zombie state) of conciousness when you are hypnotised.

Martin demonstarted many things which fall under umbrella of Hynotism without Hypnosis.

- Martian language: It was amazing. Three people Raghav, Harsha, Nupur were made to believe that they were people from Mars. Raghav was made interpreter between English and Martian language. Then Martin asked some questions to them

Some other questions and answers
Q- "what do they like in Mars women", A-"eyes and ears "

Finally these 3 ppl were made to sing national anthem of Mars. It was awesome. Audience stood up to respect their anthem :)

- Piercing body with doctors sterile outlet: A girl by name Deepthi was asked to pierce her hand with outlet. Initially she felt pain. Martin said "ABC" then pain vanished. Then "CBA" pain came back. This was repeated 3-4 times.

In the end Martin said "Hypnotism has much to offer then entertainment. It can be used in field of sports to avoid nervousness, nail biting etc .."

Presentation of Martin was nice with some non veg jokes :). It was Martin's first talk in India. Actually his first talk was supposed to be Mumbai on 17th, but was cancelled due to obvious reason - serial blasts.

So whats required to be a Hypnotist. Hypnotist's skill is most important factor to achive Hypnotism
To conclude I didn't had any major expectations from this talk, but returned with a lot of thing that I can apply in life.
at Tuesday, July 18, 2006