Our manager Ramesh's marriage was there at his hometown Addanki ( 50 km from Ongole, Andhra Pradesh) on August 4th 2006. Many people of our team dropped out. Finally me, shreesh and seena were on board. We with 3 people of other team took KSRTC Airavath to Ongole (costal Andhra). We departed from Bangalore around 7 pm and reached Ongole next day at 5am. From there we took ordinary APSRTC bus to Addanki.

At Addaki bus stand ramesh's brother came to receive us. He took us to a lodge. After finishing morning ablutions we went to choultry to have breakfast. Then we roamed around Addanki and also went behind marriage procession.

Marriage procession of bride was not so traditional. It had a modern style band. They were playing instruments such as keyboard, electric guitar. The marriage was also not in fully traditional way. Ramesh came to mantap wearing blazer. !!!. Rest of stuffs were traditional. Lunch was served in hygienic way with stuffs such as big paper plate, 500 ml mineral water. However in my icecream there was an insect. I almost become non vegetarian :) 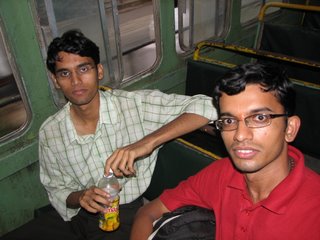 We decided to go to Narasaraopet ( may be named after PV Narasimha Rao, not sure). After reaching Narasraopet we found out that buses to Hyderabad would be available from some other place by name Pidugaralla. We took another bus to Pidugaralla and reached at 5:45 pm. Within 10 minutes we got bus to Hyderabad. We were shocked to hear from conductor that this bus would reach Hyderabad at 11 pm. Seena's plan of boozing were washed out. We came across many places enroute to Hyderabad, namely Vishupuram ( India Cements factory), Nalgonda (this place was in news some years back). It was raining incessantly throughout Andhra. So bus was going at speed slower than usual. Finally bus reached Hyderabad at 12 midnight. Eventhough the journey was lengthy but it wasn't tiresome. thanks to good roads of Andhra. We hardly came across potholes in entire 10 hrs journey.

At Hyderabad Raghu had booked room for us at hotel Ambassdor. As soon we got down from bus a autowallah approached us. He said Rs.150 to Hotel. We agreed since didn't had any other option. On the way to hotel we witnessed amazing roads of Hyderabad. Even after continous rain of one day there was hardly any water logging in Hyderabad roads. some of roads in heart of city in heart of city were 5 lane on sigle side. Seeing this seena immediately decided given a chance we will definitely work in Hyderabad. We reached hotel ambassdor at 12.30 am. Security allowed us inside the lobby by enquiring that we already have a booking. After check in formalities we said its time for ctrl-alt-del.

Next day morning I got up by phone ring from Raghu at 7am. He told us to be ready by 8.45 am. We had a plan see Superman Returns at Imax. Raghu got his Wagon-R. We via necklace road to prasadz. necklace road is one of hotspot of Hyderabad. We reached prasadz around 9.30 am. After buying tickets for Superman Returns we took some snaps at complex. Watching movie at was nice experience. Some of 3D scenes were awesome ( separate post is needed to describe everything). 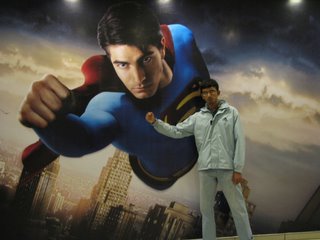 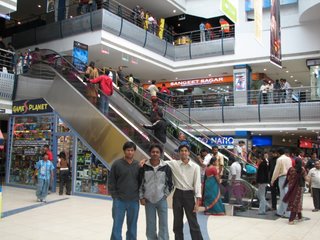 After movie we did photo session again Atmosphere was not as electrifying as our Forum Mall. But Imax is a big plus point for this complex.

Then we decided have lunch. One shouldn't return from Hyderabad without eating biriyani. So Raghu took us to Paradise Hotel. There my friend and ex colleague Naresh Panda joined us there. He started taking about his usual stuffs such as his opinion about movie superman, his arguments with his manager etc. seena almost got irritated with his non stop talking.

After lunch we decided to go to Birla Temple. Its Lord Venkateswara temple constructed on a hillock by birla foundation. The view of city from top was nice. Then we decided to go to Lumbini Garden. On the way we experienced bumper to bumper traffic at some places. (bangalore is not the only place to have such kind of traffic) 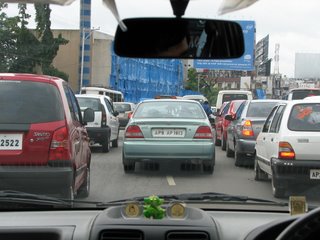 From Lumbini Garden we took boat ride to island of Buddha statue. In island we were suprised to see rats !!!. 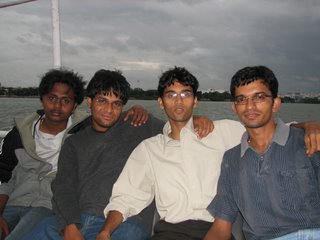 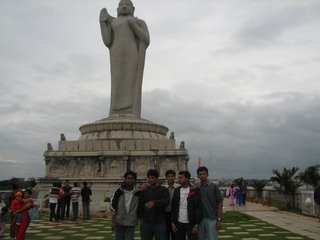 Then we had ice cream and pani puri at shops near parklane secunderabad. It started raining again. Panda decided to leave to his home. It was end of 6 hrs non stop entertainment. Then Raghu also decided to leave. Without his car it would have difficult to cover places in wet weather.

At 10 pm we boarded Sharma Travels bus to Bangalore and it was end of exciting trip. This was first time I went on excursion with my new colleagues seena, shreesh and raghu. Looking forward to more trips with same group with more people on board.

Thanks to Raghu for his guidance, booking of tickets (both onward & return journey), booking hotel and also for getting his car. Without him this trip wouldn't have been materialised so well.

Comments are welcome for post as well as snaps.
at Sunday, August 06, 2006