Looking at title one would feel that this post about rivalry between two goddess ??. Actually its about tradeoff between Lakshmi and Sarawathi in different context. I never intended to write a post about this topic. But discussions in my previous post(corporate) made me to write one about this.

3-4 years back Sharukh Khan(SRK) in an interview was asked about his expectation of his home production. He replied "As a filmmaker I expect both Lakshmi and Saraswathi for my movie i.e. both Box Office Success and Critical Acclaim :)". 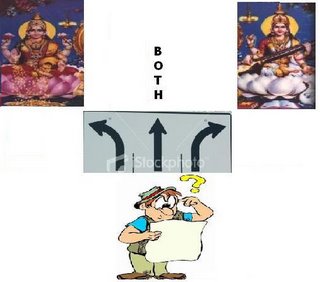 So in context of movies

Lets discuss about this in detail.

Lakshmi
So what factors make movie a commercial success

So movies which had only box office success without much crtical acclaim K3G, Raja Hindustani.

Saraswathi
whats required for a movie to obtain Critical Acclaim

Movies which had only critical acclaim were Swades, Lakshya, Yuva ...


In Bollywood movies attaining both Lakshmi and Saraswathi are very rare. Some of such rare movies are Lagaan, Black.
- Lagaan was a period movie based on theme winning of an underdog. Critics appreciated its screeplay and production values. General public liked nail biting cricket match in movie. It was a hit all over .
- Black was based on the life of Helen Keller. Critics appreciated the movie but dismissed it as multiplex classic. However movie was across the board hit.

Lets take recent releases as examples.
- Krrish. Eventhough it grossed 69 crores in 7days, movie lacked in deparments of screenplay and music, therefore wasn't so much appreciated by critics. But movie is so much successful that the marketing strategy of Krrish has become a case study in top Indian B-schools.
- Omkara. Appreciated by critics. But not doing well at ticket windows, since its not everyone's idea of entertainment.


If there is a conflict between lakshmi and saraswathi what should a film maker prioritize ??

What i feel is packaging (yashraj films are master in this department) of movie is really important with decent storyline, good songs and more stuffs for entertainment. so lakshmi should be primary and saraswathi secondary. Generally a filmmaker is as good as box office performance of his last film. No one remembers a critical acclaimed movie which was unsucessful at box office. People remember Lagaan and Black because they were successful at box office.

But box office is unpredictable. People's idea of entertainment changes from time to time. Rakesh Roshan is one of the few filmmakers who understands the undpredictable box office. Recently there was an article in Times Rakesh Roshan: Bollywood's own Superman. In article its mentioned that Rakesh has defied all labels, improved with each passing project and today understands what will work and what won't at the 'unpredictable box-office'.

To conclude I enjoyed writing blog post about this topic. you would have also enjoyed reading it. But your opinion might be different. Feel free to post it as comments.