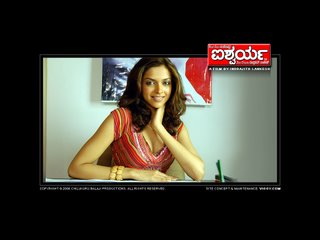 These days if you are travelling on Bangalore roads you can witness one common thing in every traffic junction. Guess what ? It is hoarding of latest Kannada movie Aishwarya. The poster has Kannada star Upendra (so called orginal superstar) in a new corporate hairstyle besides bengaluru hudugi Deepika Padukone. Nice to see Kannada filmakers have learnt stuffs such as marketing. Great going !!!. Other than posters the music of movie (already a superhit) and debut of Deepika had generated expectations from the movie.

With the built up hype I decided to see movie in first weekend itself. My actual plan was to see movie with Raveesh at Veeresh in vijaynagar. When Raveesh was unable to get tickets, I thought of having a look at Venkateshwara theatre near my house, hoping that i will get a ticket in black. When I went at showtime at 2:30 pm there was one gentlemen looking for sale of his one extra balcony ticket. He gave me ticket for Rs. 50. So the show in on !!!.

The plot of the movie is waferthin. Its about a add agency manager Abhishek Hegde aka Abhi(Upendra) and affair his with two girls Anjali (Daisy Bopanna) and Aishwarya(Deepika).

Anjali is Abhi's first love, but the love story ends with an unfortunate accident. Abhi's family hides Anjali's from Abhi saying that Anjali has ditched him. This creates deep resentment about women in Abhi's heart. He tries all possible ways to insult women inclding his new manager Aishwarya. But Abhi's heart changes on a business trip with Aishwarya to Europe. There is a twist Aishwarya tells to Abhi that she is already engaged on the top of Vienna tower. Many emotional stuffs follow, finally Abhi and Aishwarya marry and live happily ever after.

One is treated with decent comedy throughout the movie, without any 'samskrita' dialogues. There is no 'macchu' in the movie, not even a fight sequence. One wont feel bored while watching the movie, thanks to engaging screenplay and crisp editing. Songs are good, beautifully shot but are out of location. I liked Hudugi Hudugi a lot ( I wrote this post listening to the same).

The major highlight of the movie is obviously Deepika Padukone. This closeup girl, product of mount carmel was the major factor responsible for pulling me to theatre to see this movie. Nice to see bengaluru hudagi rocking a kannada movie. Of late actress in kannada movie would be either Ramya or some other imported actress. As an actress Deepika scores in every department such as good looks, screen presence, dialogue delivery, dress sense, anatomy etc.

Heard that Farah Khan has signed up Deepika for her new movie opposite to SRK. She is going to be a big star as said by Farah Khan in her recent interview. So current actresses esha deol, priyanka chopra, bipasha (who act with 1 inch of make up) days can be numbered. All the best to Deepika.

To conclude there nothing much in plot of the movie but the way it is packaged with songs, good locations, comedy, etc make it a Paisa Vasool movie.

This is my first non bollywood movie review. I dont have reviews of Taran Adarsh and Rajeev Masand to mention in my post. By the way here are reviews of some other people.
Rediff - (3 star)
Hindu - (no rating)
Newindpress - (no rating)
at Sunday, September 17, 2006