Last weekend I went for trek to Ombattu Gudde at Kabinale Forest Reserve(Shiradi Ghats). This time it was with my colleague Harish and his friends Ganesh and Rohit, who are trekking freaks. Other people of Harish’s group didn’t join because of diwali. We decided to go with only 4 people on board as we wanted to be away from air and noise pollution. 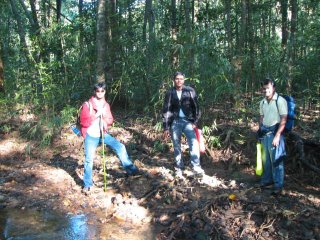 Our initial plan was to Dabbe falls near Sagar. Then it was changed to AmediKallu near Dharmasthala. Five minutes before boarding bus to Dharmasthala we decided to go Ombattu Gudde. Ganesh had been to this place one year back, wasn’t able make it to peak and hoped to make it this time. Recently this place was in news because 3 people from Bangalore had lost their life. See Three youths missing from City missing for more details.

The journey was unfortunately eventful. At Hassan, the driver realized that 'dim-n-dip' mechanism of headlight was not working properly. He decided to continue, but a person jumped into argument and forced driver to take bus into Hassan depot. He was arguing its dangerous to go in Ghat section with non functional headlights and was demanding change of bus. After some ‘tu tu main mai driver decided to carry on with same bus with some workaround.

The condition of NH-48 is horrible after Sakleshpur. I wonder how our driver was able to drive with workaround !!!. We got down 2km after Gundya (near Tata Cocoa estate) at 6am. After walking few 100 meters and crossing a bridge, we got a board on right side showing way to Kabinale Forest Range. From here our trek started. Initial 1 km trek was besides areca plantations and houses. We ignored any villager came across because they might scold and ask us to return because of risk.

After walking for 2km+ at 6:45 am, we heard sounds of elephant from distance and after a few minutes we heard 3-4 gun shoots. What’s happening have we put our life at risk ?. We thought of returning back and goto AmediKallu instead, but we continued lets by quoting ‘The Greatest Risk Is Not Taking One’. 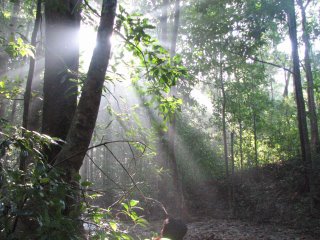 The weather was very humid, my body started drenching with sweat. Also there were ‘part n parcel’ of trek – Leeches. I feel treks are incomplete without bites of this creatures :). One can’t be so generous for blood donation, we were carrying snuff(tobacco powder) to remove Leeches. While trekking we crossed many small streams and two medium sized streams. The forest was so dense that sun was hardly visible. It was densest jungle I had trekked so far. 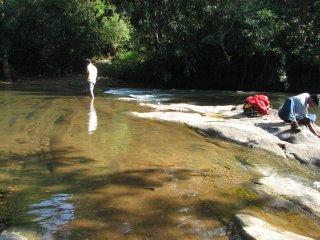 At 9:15 am we reached banks of river Kabinale and decided to have breakfast (bread butter, MTR ready to eat pongal etc). To continue our trek we had to cross this Kabinale river. The water was waist deep level. After crossing Kabinale we settled down at a rock next to river and removed all leeches attached to our shoes, legs …

At 10.30 am we continued our trek. After crossing some small streams we reached banks of another river Adhahole. Here we found traces of human activities. On the banks there was a sort of bamboo shelter and also of a face of a big bird ( donno which bird it was) placed on top corner. Some people would have eaten that bird as feast. Was it done by villagers, naxalites, forest officials … who knows ??. There were used bullet shells, all over the place. It might be of telescopic rifle.

To continue our trek Ombattu Gudde that we had to cross Adhahole. After R&D of 45 minutes we couldn’t find a way to cross Adhahole. Finally at 11:45 am we decided to return. Now our new plan was to go to Kukke in evening and next day to Dharmasthala. Ganesh was disappointed because it was his 2nd unsuccessful attempt to scale ombattu gudde. 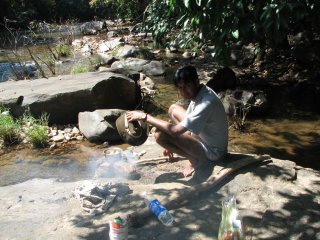 Then we came to banks of Kabinale river and decided to relax by getting into water. After that, we decided to have lunch. Ganesh was carrying a utensil to boil water. Rohit(Roti) took charge of lighting fire and boiling water. We used hot water to prepare cup noodles. Roti also made an attempt boil potatoes. He was partially successful, the boiled potato was not really eatable although I ate one.

At 3 pm left we crossed Kabinale and started our trek back to highway(starting point). After some brief rests on the way we reached highway around 6.00 pm. We had tea at hotel Durga Parmeshwari next to bridge. From here we took a jeep to Gundya. From Gundya we got a bus to Kukke Subramanya and reached there around 7.00 pm. We couldn’t get any accomdation at Kukke. All hotels had put ‘No Rooms’ board. Considering the situation we decided to leave for Bangalore same night. We got last row seats in 10 pm bus. After confirming tickets we went to temple for darshan. The crowd at temple was more than usual because of long weekend. 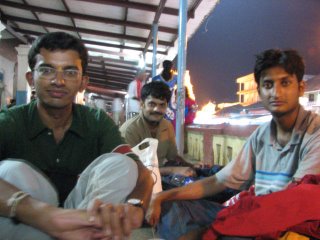 We left Kukke at 10 pm and were back in Bangalore at 6.15 am. It was end of incomplete eventful trek. Hope we will reach till Ombattu Gudde peak in next attempt.
at Wednesday, October 25, 2006