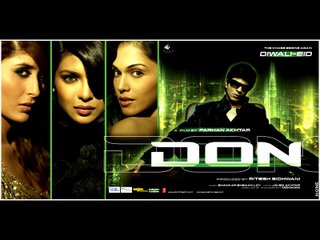 DON – the chase begins again, remake of Big B’s DON(1978) released in theatres today. I was waiting for this movie from last one month. A few weeks back I had read an article, in which it was mentioned that the remake has a different ending. So I decided to see movie as early as possible. The movie wasn’t releasing at my favorite theatre Urvashi and I had to see it at PVR. The advance booking for tickets at PVR started from Sunday itself. I intended to go for premier show on Thursday so that I can see movie without even hearing/reading single review. Ande managed to get for 4 people (me, ande, ski and seena) for Friday morning show. I was disappointed because seats were second row from screen, but seeing the movie FDFS was more important.

The movie starts of in typical James Bond movie style with pre credits sequence which does not have relevance to actual storyline. The credits are in green black combination reminds of sci-fi movie The Matrix.

The basic plot of movie is same as original. SRK as Don is good but role of Vijay doesn’t suit him. Priyanka Chopra as Roma (junglee billi) has given decent performance. Music of the movie though derived from original is good, especially signature tune is awesome which used as background score in major part of movie, is still lingering in my ears.

Comparisons with the original are inevitable. Lets discuss about some of the similarities and differences.

As of now I can mention only these points. If I see original and remake again, I will add more points.

There a few good scenes in the movie (may be lifted from some flicks). These scenes good in style and technical angle but some are no so good when looked from perspective of substance.

Minuses of the movie

To conclude I saw this movie without reading even a single review. First of all remaking a movie is a big risk and Farhan has done it by adding style and surprises. In my opinion it is watchable, paisa vasool movie, could have been better with deft execution.

So whats your opinion about the movie, please post it as comments (anonymous comments are allowed). Don't forget to mention your name because I will be moderating comments.