Woh Lamhe ... sounds like a familiar phrase. yeah it was famous number sung by Atif for movie Zeher. There are many movie titles which were hit numbers before. Some which I can recall Kabhi Alvida Na Kehna, Koi Mil Gaya, Diwale Dulanhia Le Jayenge. 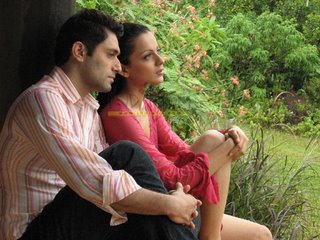 Movie starts with suicide attempt by Sana Azim. Then there is flashback .... 3 years earlier ...

Azim is a famous star having problems in her personal life. She commits to do a film with struggling director Aditya Grewal much against her boyfriend's wishes and also ignoring contracts with a producer. Aditya maintains calculative relationship with , but sees Shiny as sensitive and caring companion and falls in love with him.

Then there is a twist, it discovered that is suffering from schizophrenia (hallucination of people who are not there actually). sees her so called roommate Rani. Aditya putting his career on risk decides to nurse (after he comes know about demise of his father) and takes her , away from her mother and boyfriend (who decide to give her shock treatment). What happens next ... for that u have to see the movie. It is not a fairlytale ending.

Shiny Ahuja's performance is top class. Kangana has improved a lot from her previous endeavour Gangster in which her dialogue delivery was hopeless. There are many scences in movie which are treated well by director Mohit Suri. One of the scene 'Kangana to retaliate throws her undergarment at Shiny in public' has got mixed reaction from critics, one says its poignant and other says its ridiculous.

So is Woh Lamhe worth watching ? This film would be watchable for people who like Mahesh Bhatt’s idea of entertainment, a package with good music of Mohit Suri, deft execution by director, steamy scenes and emotions. For Bangaloreans I feel it can’t be said as must watch in theatres, since its screened only in multiplexes, one has to spend Rs.180 to see this movie :(.

- Taran Adarsh : ( 3 and 1/2 star) : There are many lamhe in WOH LAMHE… that you carry in your heart and that's why the film works for the moviegoer.