Last week there were cultural events at our company for Phooljhadi 2006. Events started on Monday 9th October and concluded with Grand Finale on Friday 13th October. 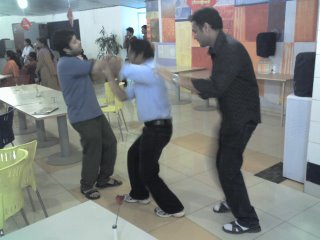 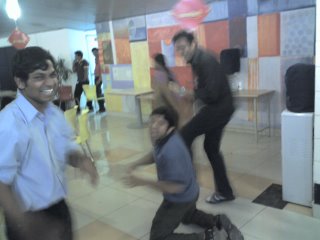 On Tuesday there was skit competition. At we decided to participate. Our skit was scripted in 45 minutes with major contribution from Naveen. It was titled 'Shande ke karnaame'. Execution was nice but we didn't concluded it properly. Saying "No moral" in the end was not appreciated.

Wednesday was very busy day. In morning there was Dumb Charades. Prelims was personality round. Ski did the miming. He was given "Ashutosh Gowarikar" to enact. We cracked that in 21 seconds. We qualified for finals coming 4th in prelims.

In the finals 1st round was about Sports Personality. In this round person miming was not allowed to use his hands. So we had develop protocol for it on the spot. The clues were very easy. We got "Mahendra Singh Dhoni" to enact, it was cracked in 23 seconds. Others cracked in less than 10 seconds. 2nd round was about Brands and Products. From this round onwards we were allowed to use hands. We got "Sony", which we cracked in 3 seconds!!!. Ski used right approach to enact camera and we got Sony in three guesses. In 3rd round we were supposed to crack 5 daily used objects in 30 seconds. We got Camera, Screw Driver, Hammer, Spanner and Eraser. We cracked all 5 and got bonus points also.

Next event was 20 questions. In prelim there was 'objects' round we got "Jigsaw puzzle", we couldn't crack it. It was dam tough. In 'geographical location' round we cracked "" in 5 questions!!!. This was sufficient for us to qualify for finals. In finals there were two rounds. In personality round "Anoushka Shankar" was too tough to crack. In professions round we cracked "Opthalmologist" in 15+ questions.

For Pictionary we gave on the spot entry. In 'movie' we couldn't crack "". We left the competition mid way as we had no chance of winning.

In evening we went to main campus to participate in quiz. We couldn't qualify for finals. We answered 9 questions and Raghu’s team who answered 10 questions qualified. (we missed by 1 point :( ). So it was time to play role of audience for quiz finals. In the finals apart from Vexillography round and a few questions, qualities of rest of questions were sub-standard. Some of the questions : How bits make one byte? Who invented Penicillin? It reminded me quizzing in my primary and high school days.

Thursday I decided to concentrate on work. But took me in his team for Mad-Ads. At ski and naveen decided to participate. I came out of 's team and joined ski, seena, naveen and raghu. The product we got was 'lungi with zip'.

We had three plots in our mad-add. Plot 1 : Creation of 'Lungi with zip' by Brahma for Shanderishi, Plot 2: Rola Kutti waiting for girl friend, Plot 3: Mittal Seth turning into a poor man and subsequent explanation by IIMB professor. Our mad-add came out very well. We were laughing continuously for one hour after performance. 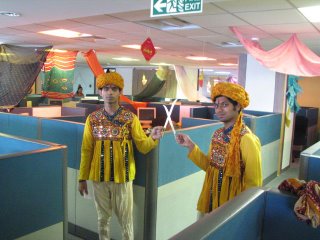 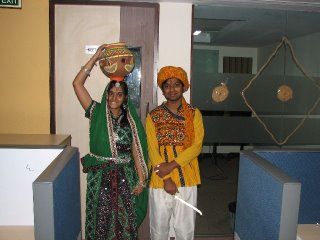 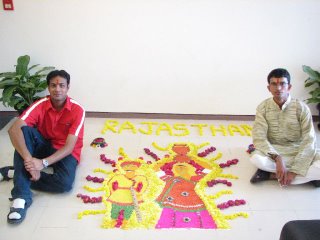 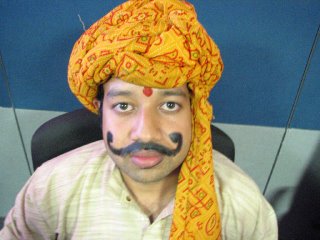 We were representing state of Rajasthan. Rollie and Naveen were wearing Rajasthani costume. They explained abt decoration of our floor to judges. They were many more stuffs other than decoration such Rajasthani dance by sugandha in front of Maharaja (Ski). In 9th floor they had decorated with various landmarks of Rajasthan such as Ajmer Dargha, Pushkar Lake etc. 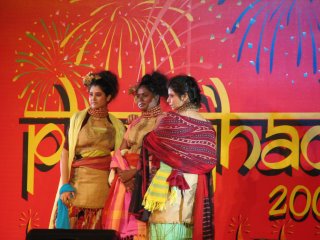 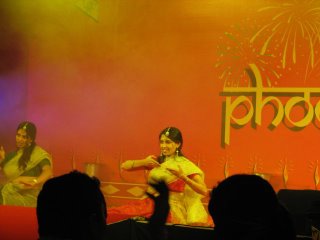 In evening there was grand finale and award ceremony at palace grounds. There was fashion show, dance performances (solo and group). We were winners in Mad-Ads and 2nd runner up in DC. Our madness abt DC ( see DC season by Harish) paid off. If we had cracked MS Dhoni clue fast, we could have been winners. Naveen was awarded Mr.Pataka. I and seena stayed after final event for DJ music, we danced like crazy people. 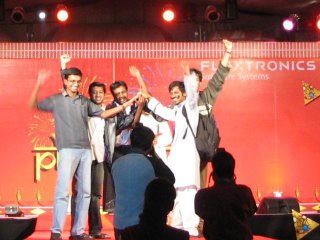 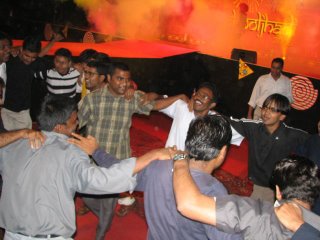 Finally we left the place around 11.30 and came back to home at 12.00 midnight. To conclude it was end of a wonderful week. It was one of the rare moment I thought why the week came to end ?
at Saturday, October 14, 2006