, it was Suvarna Karnataka Rajayotsava day . Rohith had planned for Savandurga bike trip and scaling the peak. There were 6 ppl ( me, rohith, venkat, kiran, rahul and karthik) on board and 5 bikes (3 victors, 2 pulsars). 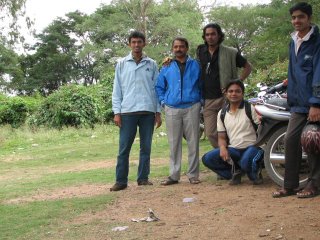 Our meeting point was ring road - road junction, where we were supposed to meet at . We left the place around and the trip was on. We decided to take route via Ramnagara since road(SH 17) is in good condition. We reached Ramnagara around , from here Savandurga is 25 km. After tea break we continued our journey. The road from Ramanagara onwards is horrible and is under repair. At we reached Savandurga. After having darshan at and buying food items we started our ascent. 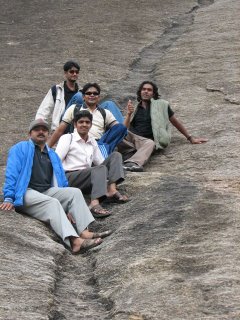 To climb the peak there is one regular way 'route-1' (with arrow marks) and there is alternative one 'route-2' (70 degree steep) which is challenging. There was other 'group of 20' (G20) peple who had come to scale the peak, were taking the usual route-1. We for the purpose of challenge and thrill decided to take route-2 to climb. While climbing I was in last position. After taking 10 steps I took snaps of 5 ppl in front of me, after this when I tried to continue ascent my woodland shoes gave up, I lost the grip and slided downwards. I got scratches on my fingers and elbow. My jeans pant got stone washed. I lost confidence and retreated from route-2. 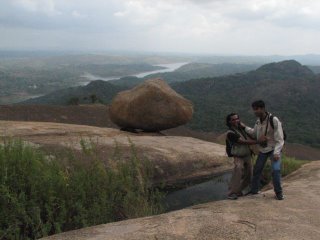 After all this I decided to go by route-1 on which G20 were going. After ascending for 10 minutes I got a call from Rohith that they are also retreating from route-2. So I waited for them sitting on a rock. In the mean time I took snaps of scenic view of tributary of Cauvery(donno its name). After 15 minutes Rohith and Karthik came. Other three were continuing with route-2. After refreshment and photo session we continued our climb.

After climbing 20 minutes we reached a place where route-1 and route-2 crossed. There rahul, venkat and kiran were waiting for refreshments which we were carrying. Unfortunately for them the bananas which we were carrying had already turned into rasaina. For them something was better than nothing because route-2 had taken lot of their energy. From this peak is 10 minutes climb. On the way we had many photo sessions and even video sessions. 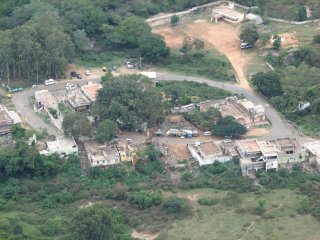 View of temple and parking lot from the peak

Finally we reached peak . It was nice to see view of temple and parking lot from the peak. There were locals of Savandurga on the peak who where hoisting Karnataka flag and celebrating Suvarna Karnataka Rajyotsava by bursting crackers. As soon as they hoisted the flag a light drizzle started and eventually it turned into heavy rain. 3 ppl(me, venkat and kiran) took shelter next to Nandi idol. Other three and G20 went to towards the cave for shelter. The stay at the peak was amazing and eventful. The view was completly blocked by mist. Then the lighting struck three times. Thankfully we were staying under concrete structure otherwise who knows what might have happened?? . 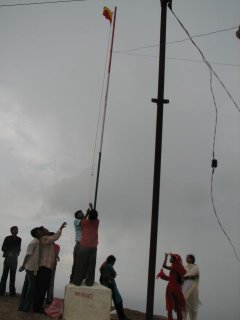 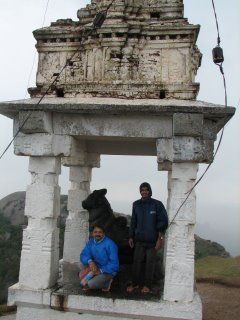 Our shelter on the peak

After rain stopped we had photo session with Nandi idol and the flag post. Then we started our descent. The rocks had become slippery. I had a tough time, my woodland shoes was giving up many times. I used all 4 limbs to go down with 100% concentration. All of us decided to go down by route-1 as no one was in mood to take risk.

When we were about finish our descent a person climbing up said that one guy has had a fall and his dead body is lying adjacent to route on which we were descending. We went to see the dead body and discovered that he had a fall when descending from route-2. I feel people of his group tried to be too adventurous. Why they decided to climb down on a steep route that too after rains. 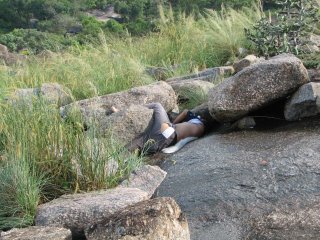 We decided to leave that group alone as they were doing the task of calling ambulance. After completing the descent at we went to Laxmi Narsimha temple again for darshan(reasons are obvious). Then we started journey back to . This time we decided to take route. On the way back we had Masala Dosa at some hotel (there were a few hotels in route, we managed to find a decent one). Finally at we were back in .