I had been to Tirupathi last weekend with my colleagues. Bhupathi was the organizer and he got 25 people on board. Our plan was to reach tirumala by 5 am and to have special darshan.

We departed from Banglore at 5.15 pm (8th Dec) by boarding APSRTC 'Sapthagiri' at Tin factory KR Puram. The seats were reserved in advance. We were delayed by half an hour because of one person as we have to hold on bus 2-3 km after tin factory. After all tu tu main main bus departed and the journey was on. 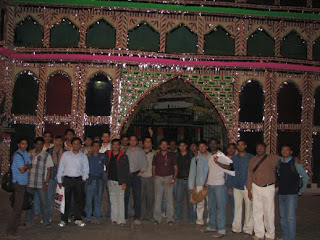 At 11.30 pm after breaking 2-3 coconuts we started our ascent. Initial 5 minutes was normal, then steep ascent started. Many people started panting. Ravi, Chethan and me (G3) were in sync. Bhupathi and Sundeep were slogging ahead of us.

We (G3) took rests at regular intervals. At some points the view of Tirupathi town downhill was awesome. I tried my best to capture it and was partially successful. 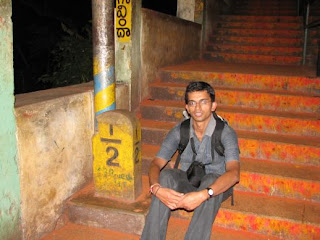 After completion of half steps, the frequency of steps decreased. At some stage there is one step for every 10 metres. we(G3) read aloud Govinda mantras written on the pillars. There was one deer park next to footpath. After that we came across Tirumala-Tirupathi road passing above the foothpath. After walking 10 min we came across 30-40 feet tall Hanuman statue. We sat in front of it for a while and continued our ascent.

There is abrupt discontinuation in footpath. We(G3) thought we have lost the way but we continued our walk on the road towards Tirumala. After walking for 10 minutes we found steps next to a gopura. Now last 1000 steps were remaining. The legs started paining. Finally we completed ascent (3650th step) at 2.15 am. We walked further to find Bhupathi and Sundeep. They were relaxing and waiting for us. They left for finding accomdation and asked us to wait for other people. In the mean time I did R&D with photography and managed to take a decent snap at the place which we were sitting. By 3 pm everyone came. 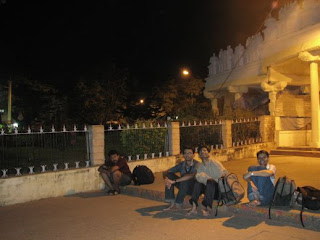 As many of us were feeling hungry, we decided to had Idly and Dosas at some shop.
Later we walked towards Karnataka choultry and where Bhupathi and Sundeep were waiting for us. We got 3 rooms in choultry for bathing. It was already 4 am, we had get ready by 5 am. Hot water was not available. we(G3) and some others decided to take bath in cold water. Others were not so flexible, they didn't agreed to take bath in cold water. Because of this we were late by 1 hour. In the meantime I took snaps of temple gopura from balcony of the room. We had brief photo session at the same place. 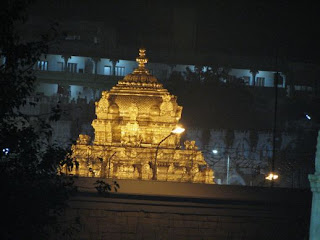 Finally we left at 5:45 am. Bhupathi had managed get entrance to VIP entrace as he had contacts. Before entering one person in our group revealed that he is carrying a mobile !!!. Inspite Bhupathi telling "No mobile phones and cameras" 10 times, he was still carrying it. If I were to be in Bhupathi place I would have blasted that person like anything. Complements to Bhupathi he was as cool as cucumber by saying "In a big group all these small things happen".

At 6.15 am we managed to enter thru VIP entrance. At 7.00 am we had darshan of Lord Venkateshwara. This place has some special power. one can't stare into eyes of lord. the naama is so prominent. one can feel power of the place. for this reason the temple attracts thousands of visitor each day.

After darshan completing darshan at 7.30 am we came back to our room. Our train to Bangalore was at 9 pm. Now we had see other places. Bhupathi asked us to form small small groups for local sight seeing, as too many will be difficult to manage. So we(G3+sundeep) formed G4.

First we had breakfast at Mayura Restaurant(not the KSTDC one) near Karnataka Choultry. The food was not so good. After breakfast as soon as we came out of Restaurant a driver approached us for local sight seeing. He said Rs. 550. Then we asked him to show places in Tirupathi also. Initially he said Rs. 1200, we bargained to Rs.1000 and our sight seeing trip was on. Coincidentally name of the driver was Bhupathi :) (I am referring him as Bhupathi-2 from here on). 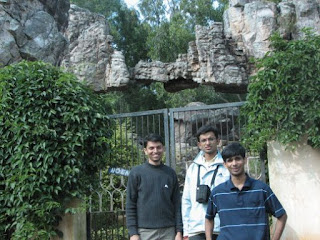 Places which we saw in Tirumala
- Sri Varipaadalu : First we went to 'Sri Varipaadalu', it is watchtower. There is pada of Lord Venkateshwara. I shot some panaromic views of landscape.
- Rock Garden: Here is there is 'Shila Torona' a unique geological formation. It is believed that Lord Venkateshwara appeared from here as Swayambhu.
- Sanctum Sanctoirum View, Gogarbham Dam, Venugopal Temple, Akashganga : nothing special to mention about this places.
- Papavinasam: Here we went to isolated place relaxed for half an hour.

It was lunch time and Bhupathi-2 took us to Woodside Restaurant. The food was too good. It really quenched our hunger. After lunch we started our journey to Tirupathi.

In Tirupathi we went to Zoological Park. Here we saw many birds and animals such white tiger, sloth bear, leopard, elephant and many variety of birds(can't recall their names). There were too many peacocks(more more mores). We spent more than 2 hrs at this place. 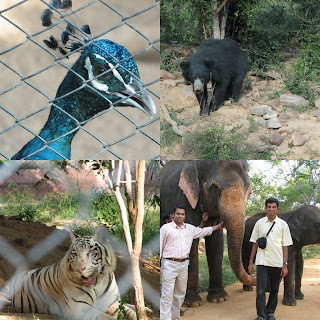 After seeing zoo we went to Padmavathi temple for darshan. After this we decided to end our sight seeing and said good bye to Bhupathi-2. He demanded more money as we made him to wait for more time at some places. Finally he agreed for Rs.1150. He dropped us to Tirupathi Railway station.

It was 6.30 pm. Still 2 more hours to do time pass. We roamed around railway station. Had tea, light dinner and coconut water. At 8.00 pm we went inside railway station. Around 9 pm we boarded train. At 9.45 pm train departed and we decided to sleep immediately as we hardly had slept for last 24 hrs. At 8 am(10th Dec) we arrived at Bangalore City Railway Station. train was delayed as it had halted for an hour near KR Puram Railway Station.

So it was end of piligrimage trip. Thanks to Bhupathi for organizing and bearing with blunders committed by some people. Managing 25 people is damn tough.

Have a look at my picasa album for more snaps.