Dhoom:2(D2), everyone was awaiting for this movie for months. The main reason for this was the trailer. I feel it is one of the best trailers(promo) of a bollywood movie. Marketing team of YRF(Yash Raj Films) made sure that the promo had everything in it to create craze among people. 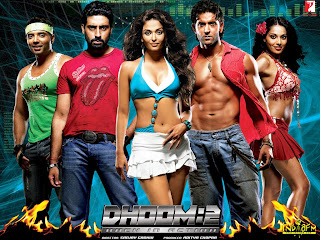 My expectations about D2 had reduced after listening to the music. For this reason I didn't even bothered to see the movie in first weekend itself, as I had to go to Kudremukh: Trip n Trek ( see my previous post).

Seena was after me to book tickets for this movie. He was chanting Dhoom2.. Dhoom2... like mantra for the entire week. Since the movie didn't get released at PVR because of some profit sharing issue, we (me, ande, raveesh, seena, chethan, ajaysimha) decided to go for Saturday evening show at Urvashi.

The movie like the predecessor is chor-police kahani packaged with stunts, special effects, songs. Jai(Abhishek) and Ali(Uday) try catch an International thief Mr.A(Hrithik). Heists take place all over the world from Namibia, Mumbai to Rio De Janeiro. Mr.A is accompanied by his fan/follower Sunehri(Ash). Can he trust her completely ?


Plusses:
- Hrithik Roshan: He has carried the entire movie on his shoulders. Without him D2 would have a been a ordinary movie.
- A few action scenes are good: I liked roller skates sequence where magnetic field is used by Mr.A to escape from the cops.
- Chemistry between Ash and Hrithik: The pair looks good on screen. The bullet scene followed by smooching is one of the highlight of D2. Thanks to Suzanne for giving smooching lessons to Hrithik [ref 4]. Relax ... it's just chemistry, please don't expect biology :)
- Makeup: Hrithik in 15 different get-ups looks awesome.
- Fresh Locations: D2 is first bollywood movie to be shot in Brazil.

Minusses:
- Story/Script: you're making a biryani and you've got the meat, you've got the spices, you've got the salt and the potatoes, but you forget the rice [Rajeev Masand].
- Music: Apart from 'Dhoom Again' number rest are ordinary. What surprises me is that the same Pritam who scored music for Dhoom:1 and also for this year's musical hits Gangster, Woh Lamhe.
- Overdone action scenes: I had expected action scenes to be good. I am sorry majority of them are substandard especially Tunnel chasing scene in climax. Unfortunately scenes are not good enough to beat RajniKanth's stunts.
- Special effects: Done by Tata Elxsi VCL are not upto the mark. I feel special effects in Krrish were much better.
- Some Thefts are hard to believe: Cinematic liberties are taken for granted.

To be frank there are many minusses but marketing of YRF and the peformance Hrithik has masked all of them. D2 has already been declared a SuperHit by trade pandits.

Finale:
- Don't sacrifice anything for watching this movie.
- In case you decide to see the movie, go early to theatre as you may miss out credits song 'Dhoom Again' (because at single screens movies start on time).
- Dhoom 2's scorecard: Physics -10, Chemistry 90, Biology N/A.