Kumaraparvatha Trek is known as mother of all treks in Karanataka. There are two routes to scale the peak, one from Kukke and the other from Somwarpet. We (I, Panda, Dinesh, Gourish) decided to scale from Kukke. Our plan was to leave to Bangalore on 22nd December around 10 pm. Everything was decided in a single day. Unfortunately we didn’t get tickets (supposed to book 2 weeks in advance). Then we decided to take a bus till Gundya and from there to Kukke. But there weren’t many special buses to Dharmastala. Usually there will be 25-30 special buses to Dharmastala, but on that day there was only one special bus. Then we looked for alternatives. An agent of private transport approached us. He took us to booking office. We relealised that it is a catch, they were charging rs.400 per head (more than double). We came back to KSRTC bus stand, were approached by another agent of different transport. He promised us 250 per head tickets, but 4 seats were not available. So we decided to book 4 cabin seats. The bus which was supposed to depart at 10.30 pm, came to majestic around 11.30 and departed at 12 midnight. 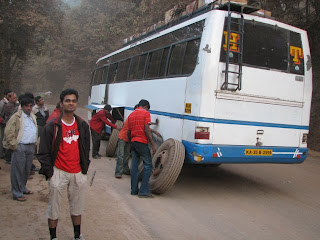 The journey was okay till Sakleshpur. After that the condition of NH-48 is horrible. We saw a toppled lorry at one place. Sometimes bus was moving at an angle of 45 degree. We had heart in our mouth, thinking that fate of our bus might be same as that of toppled lorry. After crossing two tough hair pin bends, driver realized that one of back tyre has got punctured. The replacement of tyre took about 45 minutes. After all happenings we reached Gundya check post around 8 am. As soon we got down we got bus to Kukke. We reached Kukke around 8.45 am. 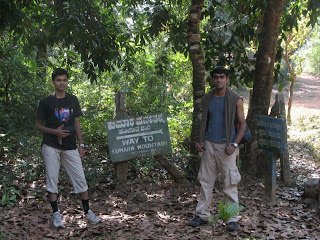 At 10.30 am after darshan and breakfast we started our trek. Initial part of trek is through deep jungle. The ascent is steep. I was exhausted in first 2 km itself. Too many trips and treks were showing effects. This was third trip/trek for consecutive weekend. My energy levels were really low. Further my luggage was too heavy, because I was carrying food items and extra pair of clothing.

With the help of my trek mates I managed to reach Bhatta’s house. After lunch and 1 hour nap we started our Trek to Kallu Mantappa. We reached there by the time of sunset. Gourish and Panda had collected firewood and set up campfire. (My enthusiasm was low and had slight fever also.) We had chapattis and other food items. At 8 pm we slept setting up sleeping bags and ground mats. There were many groups sleeping in 100-200 m radius. The place was like ‘mini Bangalore’. 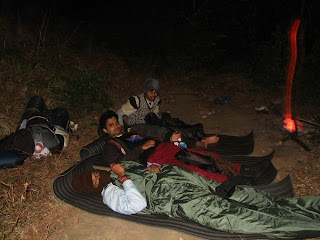 Next day(24th Dec) we woke up at 6 am. After half an hour we started our ascent to the peak. I thought my condition would have improved after sleep. But it was same as previous day. After taking sufficient break I finally managed to reach peak at 9.30 am. I did it in spite of so many obstacles. At peak we had biscuits and chocolates as breakfast. Later we had brief photo and video session. 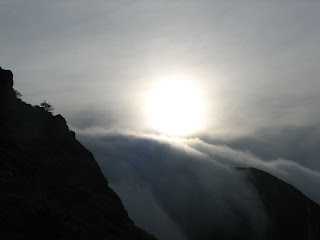 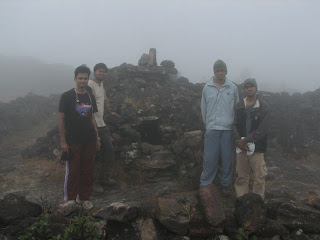 We started our descent at 10.30 am. Initially we lost the way. After backtracking we came back to the actual route. My mates had expected me to be faster while descending. But I was dead slow, memories of Savandurga made me cautious. I managed to reach Bhatta’s house at 2 pm. After lunch at 3 pm we started our return trek to Kukke. The blisters on my feet slowed my speed. Somehow I reached Kukke around 5.30 pm.

First we booked tickets to Bangalore. We got last row seats in 9.30 pm special bus. Later we bathed in Kumardhara. The bus departed at 11 pm after all confusion. The journey was horrible as we were sitting in last row, it was like experiencing a earthquake of magnitude 8.0. At 5.30 am we were back in Bangalore.

Before concluding I want to say thanks a lot to Gourish, Panda and Dinesh, without their cooperation I couldn’t have completed this trek. I learnt many things from this trek. One of them is not to schedule trek/trips in consecutive weeks, because it results in low energy levels and therefore low enthusiasm.

Snaps of this Trek are shared at
my picasa album
at Wednesday, December 27, 2006