V-day was not just another day for me.

For some people of today’s generation Valentine Day is one of the most awaited day. The rest have the opinion that it’s just another day. This was my opinion till last year. In fact my friend Manish has gtalk status ‘Yet another V day goes without a V’. For me this year was quiet different. Relax .. Relax .. the difference is not in the area of 'V' but something else.

Handwriting Institute India in association with Barista conducted free Handwriting Analysis for the occasion of Valentine’s Day. I was part of outstation(Hyderabad) assistantship team. 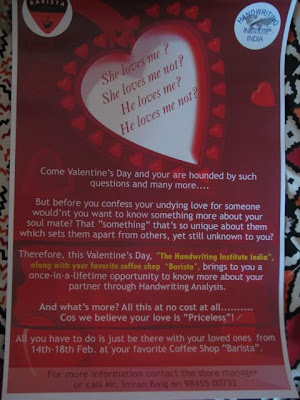 We (Imran, Rashmi, Meeta and me) departed from Bangalore at 9pm on Feb 13th, reached Hyderabad next day around 8 pm and checked in at Royal Banjara Inn. In Hyderabad we conducted event at two outlets Banjara Hills and Jubilee Hills. I was given responsibility of managing Jubilee Hills outlet along with Meeta. 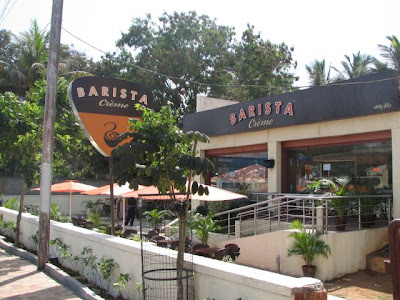 Barista Outlet, Jubilee Hills
We were at the outlet around 12 noon. After putting the posters we started with our analysis job. This assisting program was different from normal exhibition and seminar one as we had to approach people and introduce about us and handwriting analysis. Initially 3 groups didn’t give positive response. After respecting their decision, I approached another group of Inter students. Only one was curious in their group and immediately gave his sample. While delivering analysis to him, his friends found the analysis interesting and gave their sample as well (the same happened with other group of friends later in the day). One of among them was a DJ by profession. It was nice to analyze handwriting of a person with different background.

Then I analyzed handwriting of 2-3 couples and also of a real estate developer. After that I got a chance to analyze handwriting of two gentlemen. After the analysis they asked for right profession for them. Later got to know that they are superintendent of police. I concluded the day with handwriting analysis of a couple whose handwriting indicated that they are perfectly compatible, in other words ‘made for each other’.

After winding up at Jubilee Hills outlet at 6 pm we went back to Royal Banjara Inn. My friend Naresh came to meet me there at 7pm and we two roamed around Banjara Hills area including Hyderabad Central Mall.

Finally, we departed at 9 pm by Raj National Express Volvo and were back in Bangalore on 15th Feb at 7.10 am. It was end of my first outstation assisting program. To conclude, 2007’s Valentine Day was not just another day for me. I helped many people to understand themselves and their partner using science of Handwriting Analysis.
at Thursday, February 15, 2007