My first travel outside India

Though I had a valid Schengen visa for onsite support since December, some how my travel hadn’t materialized for many days. Last to last week when Ramesh asked me whether I am interested in Samsung project, I didn’t agreed immediately. After discussing with Chethan(who already is in Korea) over the weekend Chethan, I changed my mind. I enquired Ramesh further about the project. He told that the work will be at Gumi, 300km from Seoul and the stay will be at the Indian guest house (IGH).

Flashback Feb 22:
I was in a meeting room taking KT from Deepak. A call came from Srikanth that may have travel to Paris to for urgent customer issue. Discussion happened with many big people and was decided that I had to travel next day. All the formalities started from raising travel requests, getting approval etc. In the evening I went to Big Bazaar to buy a travel-bag, MTR Ready to Eat. Next day while going to office I got a call from Shreesh that the customer issue is resolved and there was no need to travel. All the overnight shopping went in vain.

Fast Forward March 22, 12.30 am:
I was on board Thai Air TG326 (Boeing 777-300) which was about to take off from Bangalore. I was excited as this was my first air travel and foreign travel. It all happened so fast that I didn’t have the time to inform my friends and relatives. At the last minute there were many panics I missed some important stuffs and adding to woes my luggage was overweight.

Subhajit and Hussu were there with me. If was alone, I would have gone mad. The flight landed in SuvarnaBhumi Airport, Bangkok 6.15 am local time. Our flight to Seoul was at 7.25 am. It was already late and there was big rush to collect transit boarding pass. Then they made a special counter for TG624 as we had to take boarding pass ASAP.

Enroute to seoul the flight landed in Taipei for 45 minutes halt. In the mean time we did window shopping at the duty free shops. At 12.55 pm local time the flight took off. On board I got Lemon Rice for Lunch. Lemon Rice ... 29000 feet above East China Sea !!! it was more than my expectations. 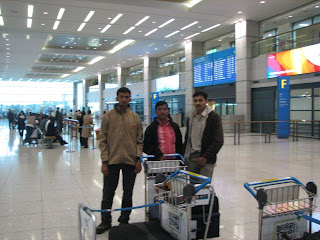 @ Incheon Intl Airport
Finally plane landed at Incheon International Airport at 4.15 pm local time. It was end of eventful journey with 3 take-offs and 3 landings within 24 hrs. We collected our baggage, completed immigration formalities and exchanged Dollars to Won (1$ = 900+ won). Hussu parted away and took taxi to Seoul, the taxi driver was a very nice person. He helped us to call IGH,Gumi and instructed us to use gate 8 to catch bus to Gumi. As soon as we came out of Gate 8 we got feeling of Korean weather. It was damn cold and fortunately we were wearing good Jackets. 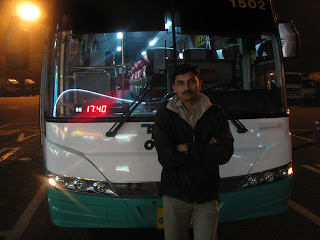 Subhajit bought tickets to Gumi at counter, the price was 26000 Won per heard. The platform for Limosene bus to Gumi is 10C. The bus came at 5.35pm and departed at sharp 5.40 pm. It was a Daewoo bus, superior to Volvo. The seats were more comfortable than that of an Aircraft. The journey was bit long but wasn’t taxing though as the expressways are too good. Even if there is congestion, people follow the lane. The bus halted at some place for 15 mins, in the mean time we had photography session. Finally at 9.30pm we reached Gumi. 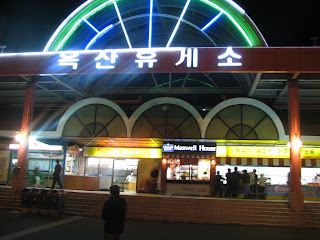 Here bus halted for 15 mins
We had to take a Taxi from bus stand to IGH. As we had card with address in Korean we didn’t face any issues. The taxi ride was memorable the driver didn’t know even a bit of English. On the way I witnessed that Gumi is a bigger city than I expected. There are flashy buildings, shopping marts etc. We saw a Samsung motor showroom. Samsung there in automobile sector as well ?? Then driver explained in Korean with hand actions that Samsung motors is a collaboration between Samsung and Nissan Motors. He tried to explain other stuffs. We also tried ask some questions but were unsuccessful in communicating.

As soon as we reached IGH, we got a call from our Korean sales office in charge that he will be coming next day at 9am to take us to Samsung office. After refreshing ourselves we had dinner prepared by Mr. Keshab (cook at IGH) and slept as we had to get up early on the next day.
at Saturday, March 24, 2007