Choku is name of a game played in Korea. In Korean ‘Cho’ mean foot and ‘Ku’ means ball. So Choku means football, but the game has very less to do with soccer. The game is similar to Asian games discipline Sepak Takraw (cross between volleyball and soccer).

Choku is a modified version of Sepak Takraw. In Choku ball can pitch 3 times before returning, whereas in Sepak Takraw ball should be returned without even a single pitch. The height of net in choku is around 3 feet whereas in Takraw it is more than 6 feet. In Takraw only feet should be used, in choku one can use head also, but no hands.

In Samsung campus employees play Choku regularly during lunchtime. Sometimes there will be thrilling contest between different groups. I am still not sure how many players should be there in each side, usually I have seen people playing with 5 in a team. We also wanted to play this game from long time, but didn’t get any opportunity, as none of our teammates in Samsung play outdoors sports.

Last weekend when we had been to Gumi park, we saw many people playing the same game in dedicated courts. One group was playing like professional. I was totally impressed by their skills. It is difficult to explain more in words, please have a look at this embedded video.

On the other end of the park we found a person teaching Choku to his kid. We somehow built rapport with him by asking curious questions like ‘which game’, ‘is it sepak takraw’, eventhough we knew about the game. Then we asked him can we try playing this game. ‘Yes’ was his reply and our desire play to Choku was fulfilled. He explained all the rules. Subhajit and me played the game for 20 minutes. I struggled a lot to return the ball. 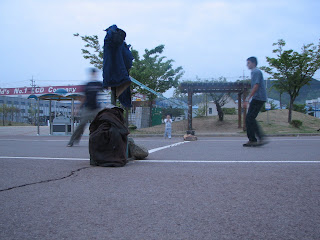 Me and subhajit playing Choku
To conclude, to play Choku one need lot physical strength, but it is good game to play. Looking forward to play more Choku during weekends.(if time permits :))