On Sunday 22nd April we had plan of going to Geumo San with Infineon G3 ( Madhu, Suren and Sampath) and Darko. But the overcast weather was not encouraging and we dropped the plan. After lunch at 3.30 pm we were getting bored and thought of going to a Park which is 10 minutes walk from our guest house. The park is next to basin of Nakdong river. We had seen illuminated windmill of this park from the distance when coming back from Daegu after Jinhae trip. 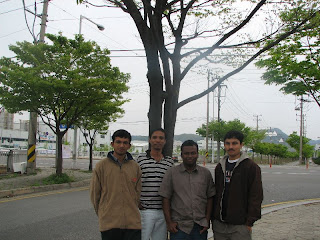 Me and subhajit with IFX guys 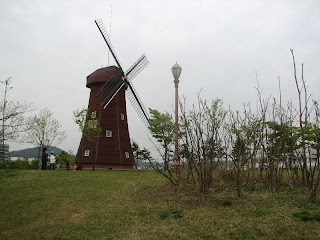 First I thought it was a usual park with a windmill as an attraction. But there are many more stuffs in it. The authorities have maintained the park very well. In the beginning of jogging track there is a board mentioning that the track is 2.5 km in lengh and one can burn 146 K calories in one lap. 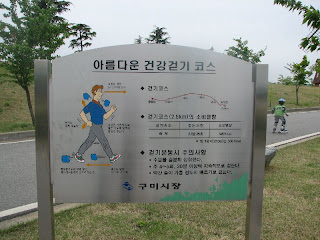 2.5 km = 146 K cal
There is a playground in which people were playing Choku (more about it in separate post), Basketball. Lot a people were skating, cycling around the ground. We watched Choku for a while. One group was playing Choku like professionals. While watching the play some guys representing nearby church distributed us a pack of tissues. Madhu thought that they were selling tissues, but it was just an invitation for next weekend’s ceremony at a church nearby. 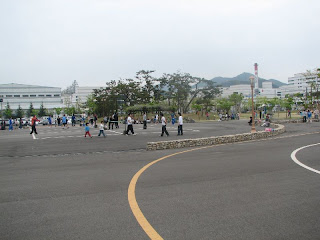 Playing Choku
Then, we went to mustard plantation next to river basin, had photography(macro and landscape) and video session there. 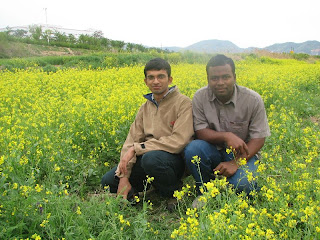 me, madhu and mustards
After sometime Infineon G3 felt cold as they were not wearing jackets and decided to go back to the guest house. Me and subhajit stayed as we had a plan of taking snap of illuminated windmill, so we continued watching ‘Choku’. 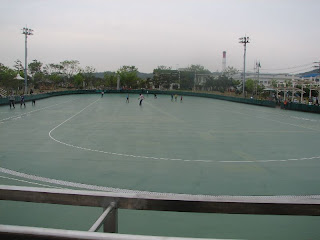 Skating ring
Then we explored other stuffs in the park. There was a skating ring where people of all group from kids to old people were skating. Our further exploration led to Korean village environment set up. It had farming place, huts, fish pond, kimchi pots, water wheel grinder, stone grinder etc. 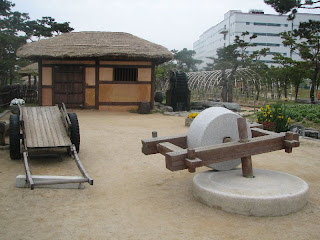 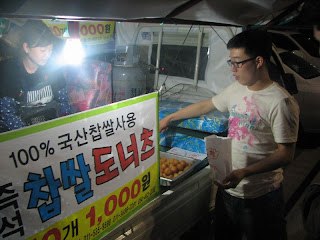 Premium Rice Pakoda, 1000 won for 10
While coming back we found a mobile shop of some eatable. It looked like pakoda, our initial feeling was that it was non-veg. After enquiring we found out that it was made of ‘Premium Rice’. For ten pakodas the cost was 1000 wons. The pokoda was similar to goli bajji(mangalore bajji).

Before coming back I captured illuminated windmill in my cam. 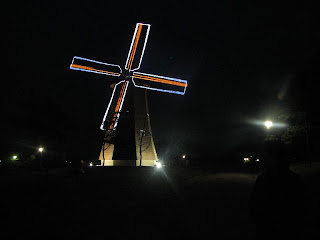 Illuminated wind mill
Before concluding I still don’t know what is the name of this park, will update it here when I get know the same.

More snaps of this park are shared in my picasa album.