The 6-month jinx is broken.

It has been more than six months that I had been to a movie theater on Indian soil. Last one was to Honeymoon Travels at Rex. The jinx was finally was broken, when I went to see ‘Sivaji-the Boss’ today afternoon at Urvashi. The theater has changed a lot over six months. The ticketing has been computerized and the booking status is displayed on LCD screens besides the ticketing counters, the same way it is displayed at PVR! 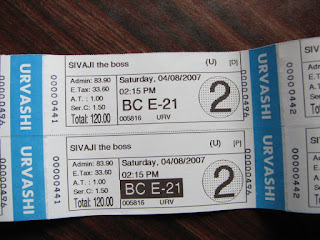 So what made me too see the movie? Well, it was all because of famous post ‘Sivaji, The Boss. Of Crap’ by Anuradha Sengupta at ibn-blogs( the post is now moved to her personal blog) The post received 1700+ comments. It was a big war in blogosphere. It went such an extent that some fans of Rajnikanth like aramki have decided not to watch cnn-ibn channel because Anuradha Sengupta works for the same channel.

Most of my friends had already seen the movie and no one ready to come for second time. My search ended at Gururaj Naik, as he was yet to see the movie. Further he promised me to translate the dialogues, if necessary. Tassa also joined us to experience the acts of the Boss(Bachelor of Social Service).

I don’t want to “write” about the movie since I don’t understand tamil. However I can’t resists myself by mentioning these points.
- the movie is very lengthy. In the first half I was desperately waiting for intermission to happen.
- technically movie is very rich.
- there are many songs in the movie. The music is not so pleasing to the ears, it’s not the usual Rehman music. The songs may be lyrically good.
- All the songs have been shot in grand sets. To be frank, the picturisation seem to be overdone. The only song I liked is in which Sherya does a backstroke swimming in the opening sequence.
- overall the movie was not looking as directed by Shankar. The magic of Gentleman, Kadalan and Anniyan was not there. He might be influenced Rajni phenomenon.

To conclude, kudos to the marketing team of Sivaji. Everyone in India would have been aware that Sivaji was releasing on such and such a date. It was major reason for movie to be so successful.
at Saturday, August 04, 2007