I was planning to see Chak de India in the first weekend itself, because of Sitnadi rafting trip I postponed my plan to 15th August. Due to our complacency we didn’t get tickets on 15th August. Finally I managed to see the movie at PVR on Saturday morning with Ande, Vijaynath and Tassa. Thanks to Ande for booking tickets. 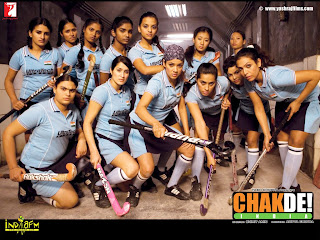