The sequel to the recent movie of 'Chak De India' was created in real life by Team India by beating Pakistan in a thrilling ICC Twenty 20(T20) final. 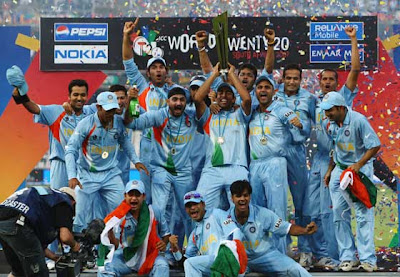 - March 23rd 2007, India made premature exit from ODI World Cup, after losing to Sri Lanka in a group match. The popularity of cricket went to new lows in India.
- July 2007, India's Trinity(Sachin, Saurav & Dravid) opt out of T20 world cup, as the format is suitable for younger players. Then BCCI had to select new captain. After seeing matching saving innings at Lord's Test, selectors decide to give responsibility to M S Dhoni.
- India lost closely fought ODI series against England. The preparation for T20 world cup was evident from Robin Uttappa's strokeplay in 6th match of the series.
- T20 kicked off, no one had expectations Dhoni's team.
- Match 1: Vs Scotland, match abandoned
- Match 2: Vs Pakistan, a thrilling tie. India emerge victorious through penalty shoot out(bowl out).
- Match 3: Vs New Zealand, first match of Super-8. India end up on losing side by not able to cross Vettori hurdle.
- Match 4: Vs England, a do or die match. Yuvraj Singh doing Full monty(6 of 6) to Staurt Broad and ultimately was the difference in winning and losing.
- Match 5: Vs South Africa, another do or die match. India held their nerves to crush Proteas on their home soil.
- Semi Final: Vs Australia. Yuvraj came to party again and disciplined bowling in last overs did the trick. ODI world champs knocked out.
- Final: Vs Pakistan. the build for this match was superb and was a described as mother of all contest. It turned out exactly the same. India lifted the trophy by defeating their arch rivals by 5 runs.

Got to feel for Misbah ul Haq. He had almost won the match of Pakistan, his fate was similar to that of Lance Klusener in 1999 ODI World Cup. His attempted scoop over fine leg, seemed initially like a winning shot for TV viewers. Ultimately ball landed in safe hands of Sreesanth and match over. India ne T20 world cup ko Chak Diya!!! Kudos to Team India and especially to captain Dhoni for making right tactical decisions at right time.

It's shame there had to be a loser after this thrilling game. But, the game of Cricket is the ultimate winner.