No blog posts for so many days... I am in Paris again for yet another biz trip and for some exceptional reasons this trip is turning out to be more adventurous and with a few traces horror full experiences.

Right from the visa interview at French consulate in Mumbai there have been many twist and turns. The head of the french consulate told me about a stupid rule that a software engineer can stay in France for duration of 30 days in a window of 6 months. Since I have stayed already in France for 10 days in February, and he won't be able give me VISA for applied duration(30 days). After hearing a blade - full of technical jargons about my work he agreed to give me VISA for 28 days valid till April 22nd.

Leaving in a short notice

After this our management decided to send my teammate Husain aka Hussu since the planned duration of IOT was beyond April 22nd. Then there was a twist Hussu got visa interview appointment on 22nd April but someone from our team has to be in Paris from April 12th. On account of having valid Visa I had to leave on a short notice. Due to non cooperation from support staff of our company and crappy laptop policies I faced a lot of hardship while getting ready for the trip. I got the travel-laptop just 3-4 hr before traveling !! After getting the laptop I left office at 8 pm, reached home at 9.30, stuffed bags with essential things and left to the airport. For being 45 minutes late I had to stand one and half extra in total for completing check-in, immigration and security check procedures.

It seemed that Hussu will not be getting Visa before April 25th, so my first priority task after landing in Paris was to apply for Visa extension at Police Prefecture. As per instruction of Flora I took the requisite documents and went to Suta(receptionist) at the office. She didn't had much idea about the extension procedure but she insisted that someone should accompany me as French translator to the Police Prefecture. Then Jiwon with the help of Mr. Joung(General Affairs manager) directed me to Kuk-Han Bonaz. She works in admin department as a Legal Coordinator. 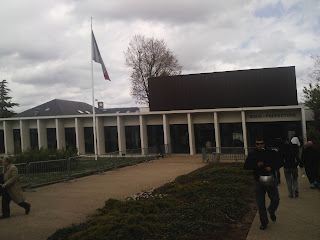 Police Prefecture at Le Raincy
On Tuesday(15th April) Kuk-Han took me to the prefecture in her boss's car. Enroute to the prefecture I got to know more about her. She is originally from Korea, married to a French and now settled in Paris. Prior to working with LG she working for working as Korean-French translator for TGV which has collaborated for development of KTX in Korea.

At the reception of Prefecture Kuk-Han did all possible enquiry(of course in French) about the extension. The procedure was slightly complicated i.e. the host company has to send a letter,followed by a few formalities. After coming back to office Kuk-Han composed a request letter in French and couriered it next day.

Till Thursday evening there was no response from the Prefecture, so Friday morning Kuk-Han went to the Prefecture to check the status of the extension request. Well, they said it is still in process. In evening, I explained my situation to Kuk-Han in detail i.e. if I don't get visa extension I have to leave Paris on 22nd April 11 am. So regarding this she sent an e-mail(in French) to the Prefecture expecting a faster response.

I had almost given up the hopes, so I spent the weekend as my last weekend in Paris. On Sunday I went to see La Defense one of the commercial center of Paris (more about it in a separate post). Monday morning Kuk-Han got an e-mail reply from the prefecture asking for my ID card. ID-Card ?? WTH ... Kuk-han replied that I have no such thing ID card keeping me in cc. After this Kuk-Han left for the day. I kept refreshing my e-mail every five minutes to check for response from the Prefecture. It was 4 pm in evening and still no signs of response and my return journey to Bangalore was almost certain.

In morning before leaving I called up Kuk-Han saying that I am taking 11:20 flight back to Bangalore. Somehow she was optimistic that I will be getting reply from the Prefecture. But I decided to carry since in case they don't get the extension I will be in big trouble and there were no back up flights in evening to Bangalore. She noted down my flight number AF192 , in case of any breakthrough she thought of contacting me.

Everything was going on normally I left Hyatt by 9 am shuttle, got down at terminal-2E, checked in my baggage, passed immigration section, took automatic train to departure gate, underwent security check, bought some chocolates at duty free shops.

At 10.35 am when it was time to board the plane, the Air-France staff scanned the bar-code on my boarding pass, asked me to show the passport and immediately said "WAIT". She tried to contact someone thru internal phone and after 2 mins she looked towards me said "This is regarding your VISA". After 5 mins the lady next to her called holding the phone "Someone wants to speak to you". Keeping the receiver next to my ears I heard Kuk-Han talking with excitement that I can stay in Paris, prefecture has replied to the e-mail, acknowledging my visa extension request. My initial reaction was "Are you sure!", and also I was worried about my baggage which was already checked-in. Kuk-Han said that she take care of that, I gave the phone back to the Air-France staff and Kuk-Han explained her the situation. Then the staff called up someone by looking up for my baggage details in the computer and ordered to take my baggage off the plane.

In order to collect my baggage I had to go back to Air France baggage service in arrival terminal. The major task was to go in reverse direction, as you would be knowing the airports terminal will be designed in such a way that the passengers are restricted to move in a uni-direction. The major hurdle for me was the immigration section. I explained the situation to a police who stamps the passport and for some reasons he was not convinced with my words and took me to the verification room.

In the room there was one Afro lady in a dejected mode and also there was one sad gentleman (seemed like an American) he had actually lost his passport and police were asking him to produce some other identification means. In between the policeman came with his senior and seeing my boarding-pass the senior thought I had missed by flight to Bangalore and looking forward for alternatives. I had to again explain the situation (in English) and gave him the phone number of Kuk-Han so that he can make a verification call. The junior and senior went inside and came back after 5 minutes. The junior took photocopy of my passport and took me back to the stamping window and permitted me out of the section.

Then I went to baggage belt section and wondered where my lone baggage will be. I went to Air France baggage service section and told the staff about my baggage. With my baggage receipt she gave my latest status of my baggage and asked me to wait for 10 minutes. In order to get latest coordinates of Kuk-Han, I tried to call her through a coin phone opposite to baggage service counter. It asked me to insert in 1.5 euros and I put 2 euros and I was not able to dial and anything. I reported this to airport staff around there. He gave me his mobile to call up Kuk-Han. She was right outside at exit and she managed to come inside on special request and did the enquiry(in French) about my baggage. They asked me details about my bag such as whether hard bound or soft bound, size and color. The guy in the counter made some 2-3 phone calls and finally said it's going to come at belt number 40 and he added "I don't know ... When!". I came out of the counter and saw that in belt number 40 there was only one bag and in fact it was my bag !

Then Kuk-han took me to the Air France ticketing counter to cancel my ticket. They took my back boarding pass and asked me to retain my e-ticket. Since my return date was not fixed and I decided to keep my ticket open with a due payment(fine) of 48 euros. All done ... Kuk-Han took me back to hotel for dropping by bag and later to the office. Since Kuk-Han was busy for rest of the day we decided to go the Prefecture next day.

After all these twists it was hard to believe for me that I was still in Paris. The credit goes to Kuk-Han for materializing this unbelievable thing.

I had speculated that this Visa extension saga will go down to the wire, but not to this extent !!!

More about the extension formalities in next post.
at Thursday, May 01, 2008