This post is continuation of Paris Biz Trip-2 and Visa Extension Saga.

The day after the dramatic Tuesday, Kuk-Han took me to the Prefecture for completing the visa extension formalities. For reference we had taken a print out of the e-mail which Kuk-han had received from the prefecture. We showed the print out to a afro lady at the reception and Kuk-han explained her the situation. Taking the printout, she went inside to discuss with her senior(officer). After five minutes she came and said "the e-mail was just for assurance, we have to follow the protocol, we already have received the request letter and will be responding with a convocation(appointment) letter. The extension process will proceed only after you receive the convocation letter". This put me in spot of bother because I was no longer a legal immigrant since my visa had expired the previous day. For this the receptionist gave assurance that since the extension in process there shouldn't be any problems as such. 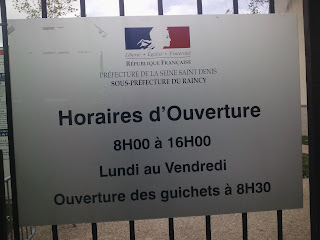 Waiting for the convocation letter I spent next few days being an informal legal immigrant. On April 28th (Monday) the letter came finally. In the letter it was mentioned that I had to come to Le Raincy Prefecture between 8 am to 12 noon with passport, residence proof and eight euros for getting the extension stamping. Residence proof ?? for a person on a business visit, sounds crazy! For this Kuk-han clarified(by e-mail) from the prefecture that hotel reservation proof will be sufficient.

Now we had to decide when go to the prefecture. Kuk-han was leave on Tuesday and Thursday(May 1st) was holiday for Labour Day. So we had to finish the extension process on Wednesday itself. On Wednesday Kuk-han was busy with her work till 11.15 am. Then we rushed to the prefecture as were supposed to be there before 12 noon, but we reached there 15 minutes late. Fortunately the Estranger section in Prefecture was still open, but no one was there to attend at the reception. After 10 minutes a lady came, she had look at my convocation letter and gave us a token(no. 690). After taking the token, I had glance at the led display. It was displaying the number 613 ... 75+ people ahead of me! we confirmed from the receptionist about the number of people ahead of us. She replied may be about 15-16 people. Then I had a closer look at the display, it was partially covered with a sticker on the top, so from the distance number 673 was looking like 613. This revelation turned out to be a breather for us.

The turns were changing in an interval of 10 minutes approximately. My turn was expected only after a hour, so we went outside to have some food. There were not many options either, but to my surprise there was a Indian Restaurant. Not being particular about heavy food we decided go to a sandwitch shop exact opposite to the prefecture . Being vegetarian I had limited choice, but with the help of Kuk-han I ordered a customized sandwitch. After having food we came back to the prefecture in a hurry thinking that our turn may be nearing.

Within 10 minutes the display tinged the number 690 and showed counter ‘G’. The attendant at the counter had a look at my passport, convocation letter and hotel reservation confirmation. Then he wrote something on a challan and asked us to get a ‘8 Euro stamp’. For getting it we had to go to other section in the ground floor. After getting the stamp, the counter guy stamped a big seal behind my expired visa and pasted 8 euro stamped on the next page and wrote the extension details with a pen. He seemed to be very generous unlike other staff of the Prefecture. He also clarified from me that whether one month extension was sufficient or not. 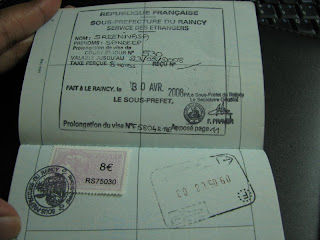 Stamped Passport
While getting back the stamped passport we had to listen to a big monologue from him. It was more directed towards Kuk-han as he was explaining in French and being specatator I was just nodding my head. He told that it is very unrealistic to expect Visa extension within 10 days and my case they have treated as an exception by allowing me stay during extension process even after expiry of original visa.

Finally, the visa extension formalities were complete and I was a legal immigrant ! The first half of the extension saga turned out like Abbas Mustan movie full of twists and remaining part became like a Karan Johar movie .. it got dragged on and on.

To conlcude, in case you are planning to apply for business visa extension in Paris, keep the following things in mind.