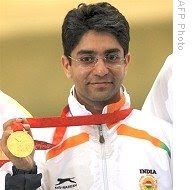 I still remember the day when I was in 1st standard(1988), my elder sister was reading out names the countries in Medals Tally of recently concluded Olympics in Seoul. I innocently asked her "Where is India in the list?". It took lot of effort from my sister to explain me the reason for India's absence in the list.

Years passed by and gradually I realized the sorry state of India in Olympic sports. In opening ceremony of 1992 Barcelono Olympics, I witnessed one of the dexterous way(by a bow and arrow) of lighting the cauldron. But the desire to witness an Indian winning a Olympic medal remained as desire. Not even a single Indian athlete came close to winning a medal.

In 1996 Atlanta Olympics, Indian Tennis maestro Leander Paes ended the medal drought by winning a bronze after defeating Brazlian Ferdinand Meligeni in a clash of semi-final losers. Well, I still remember the opponent's name! It was indeed a memorable moment and I still have the newspaper cuttings of the Leander's feat. It was nice to see 'India 0 0 1' highlighted in a list of more than 50 countries.

In 2000 Sydney Olympics, weightlifter Karnam Malleshwari got India's name in medals tally within 2-3 days after opening ceremony. But you know what "yeh dil maange more". one bronze we had got in previous games itself, let's win more. Unfortunately our tally remained as '0 0 1'.

In talks shows of various TV channels journalist, sportsmen, bureaucrats and politicians debated and debated about India's sorry state. Nothing significant changed, the only change was the topic of the debate, in late 90s it was "90 crores people - 1 bronze?" and post 2000 it was "1 billion people - 1 bronze?" 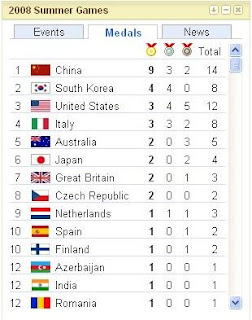 Then the present Beijing Games started off with a spectacular opening ceremony. In the build-up to the Games India had major disappointments, the national hockey side failed to qualify for the Games. Just before the start of the Games, there was a setback after the weightlifter Monica Devi was banned after being tested positive. Later reports claim that she was clean and the incidence resulted in unnecessary regional politics.

The day after the opening ceremony, I switched on the TV in morning expecting some good news about Indian Athletes. The marquee of a news channel read 'Indian shooters disappoint'.
Seeing all the stuffs I hardly kept any expectations from rest of athletes. But things didn't remain the same. Today morning when I logged into my machine in office and opened my official mailbox, there was a mail from my friend Praveen saying that Abhinav Bindra has won on a gold in shooting! Initially I could not believe my eyes, to confirm I talked to my colleagues around. Some had already made Abhinav's pic with gold medal as wallpaper. It took a while for me to digest the good news. There was sense of excitement that I will be seeing 'India 1 0 0' in medals tally of next day's newspaper, the day which I was awaiting for so many years.

Congratulations to Abhinav, I hope it boosts the performance other athletes and hence increasing the India's tally of medals.

Some tit bits: Abhinav is an MBA graduate and CEO of a company by name Abhinav Futuristics. He has a dedicated blog in which he is posting about his experiences about present olympics. His latest post is already flooded with comments.
at Monday, August 11, 2008