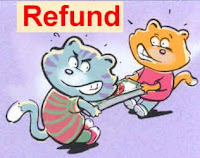 I was supposed to travel from Bangalore to Mumbai on 17th July 2008 by Indigo Flight Number 412. Since it was a personal trip, I opted for a low-cost airline, but the ticket rates were not so low, thanks to recent increase in fuel price. The total price of my ticket was Rs. 4800(base fare 1500 and rest taxes).

Flying out of Bangalore is a kind of big headache for me. My house is in West-Bangalore, my office is in East-Bangalore and the great BIA airport is in North of Bangalore. So on the day of flying to avoid any kind of hassles, I carried the luggage(my backpack) in the morning itself to my office. In evening, somehow  I managed take off from my work and left the office at 6.30 pm. The cost optimization because of personal trip prevented me for opting for a taxi, instead I waited for BMTC's airport shuttle - Vayu Vajra at Siddapura bus stop near my office.

A bus came at 7 pm and immediately after boarding the bus I confirmed from the conductor the expected time the shuttle was supposed to reach the airport. According to him the bus was supposed to reach 8.45 pm and 9 pm worst case. As I was sure of reaching the airport half an hour prior to the departure, the thoughts of canceling the ticket didn't even came to my mind. At 8.55 pm the bus reached the airport. I rushed to the departure terminal and tried to check-in using e-kiosk. It was very sad to discover that none of the BIAL officials knew to operate the machine. I wasted 10 minutes by making a few unsuccessful attempts at the kiosk. Then, I went straightaway to the check-in counter. There I heard a BIG sorry from a Indigo employee. Turning up 25 minutes before the departure and with only a single cabin bag as luggage, I was tagged as a latecomer. Rubbing salt to the wound was to hear the fact that it will be difficult to get a refund. Then to continue with my travel plan, I had to take Jet Airways flight at 11.10 pm by booking Rs. 6000 ticket on the spot.

Later after completion of my trip, as per instructions of Indigo's correspondent, I sent a mail to customer care of Indigo explaining the series of unfortunate events which made me turning late at the check-in counter. I explicitly asked them for a refund, atleast tax component(fuel surcharge) of the ticket fare, which is nowadays more than half of total ticket price.

The following reply came from the customer care.

Thank you for your mail. We sincerely regret the inconvenience caused.

IndiGo stands for three things: fares that are always affordable, reliability, and taking the hassles out of travel.

Among the actions IndiGo takes that allow us to offer affordable fares on every flight and on every day is to offer only non-refundable fares, and that means we charge people who don’t show up 30 minutes prior to departure. Alternatively, if we were to do things “the old fashioned airline way”, then we would have three bad choices: either (i) all passengers would pay higher fares to pay for the people who don’t show up on time; or (ii) we could overbook the flights, meaning that sometimes people who have a legitimate reservation are turned away; or (iii) we could hold the flights, so that the majority of passengers would not get to their destination on time.

Since the fare and surcharges (Fuel: Rs.2900, Congestion Charge: Rs.150, Transaction Fee Rs.50) are forfeited, we will be refunding the tax amount of Rs.225 per person per sector back to the travel agent www.yatra.com.

We realize you may not agree with the current policy, but we feel strongly that it is this sort of discipline that allows us to bring consistently affordable fares, every day.

Thank you for choosing IndiGo, and taking the time to communicate with us.

My take on the response.
- Thank you for what ?  accepting the peanuts ? refund of Rs. 225. I won't accept it unless the entire tax amount is refunded.
- After experiencing the stubbornness of the ground staff and policies by customer care, I have decided that Indigo will be my least preferred airline, if I am traveling by Air due to personal reasons.
- The airline is very well aware of the distance of new Bangalore airport from the heart of the city. If they are so strict about timings, then they should arrange dedicated shuttle services to the passengers, so that all customers turn up on time. I guess all the Indigo users will be non business travelers, so many of them will not enthusiastic enough to opt for a taxi.
- With the current attitude, I hope the airlines survives in current turbulent times. A recent article in businessworld mentions that many of the airlines are unable to recover even the fixed costs on a large number of its flights, leave alone the variables. May be Indigo has found a way out i.e. by charging almost full amount to the customers to turn up late by a few minutes after cut off time.
at Tuesday, August 12, 2008