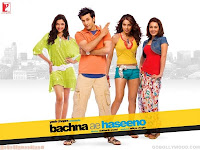 Finally I broke the jinx about which I had posted a few days back. I was chatting with my friend Ajaysimha, then suddenly an idea flashed about seeing the movie Bachna Ae Haseeno(BAH.) I immediately checked and booked tickets in Urvashi Cinemas's wesbite (which has an online booking facility now). I didn't called my other friends because the movie was yet to be reviewed by experts. If the movie turned out to be a bad one, I would have got blasting from my friends.

Performances
Technically speaking the movie has decent cinematography shot in Switzerland, Venice, Italy, Australia. It could have edited better as it lacks pace in many places. Apart from title song and Kudha Jaane rest of the songs are not so good on ears. The title song comes in starting credits itself, so don't be late to the movie hall.

Overall a timepass movie, the story is basically good has some sort of message. But it could have been a better movie. Recent observations indicate that trailers of all Yash Rash movies have been good and have given a good build-up to the movie, but the actual movie doesn't match up to the expectations. May be something on which the movie factory should analyze and work