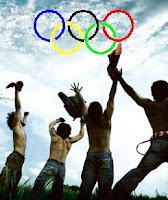 The 2008 Beijing Olympics has been the best performance of India ever with a medal haul of 1 Gold and 2 Bronze. Apart from the results there have been many discussions in sidelines. Can India Host Olympics, Who is the best athlete etc ?

Can India Host Olympics ?
According to a Businessweek article there are three major hurdles
- The country's pathetic performance in Olympiads.
- There is the issue of upgrading the infrastructure on time in a fractious democracy.
- Indian voters have become inclined to driving incumbent governments out of power.

Olympic Telecast on DD sports.
Last Saturday evening I was glued to my TV to watch signature event of the Olympics i.e 100 meters sprint. It was an horrible experience to watch the telecast on DD sports. The Hindi commentator didn't had presence of mind. When Usain Bolt created world record by clocking 9.69 seconds, the commentator shouted Olympic record. Even in semis the commentator was not aware that Tyson Gray, one of the favorites to win the gold model, failed to qualify for finals.

Michael Phelps v/s Usain Bolt
Who is the greatest athlete of current Olympics. Should we evaluate a athlete only on medal count ? Because there will more events in swimming than other disciplines. Anand says in his newly launched blog that there should not be any comparison.
Bolt recently told to media

Phelps is fastest in the water, I am fastest on the ground!!, So you can't really compare

Cricket v/s Olympics
It has become a big debate, whether it is time in India to give importance to other sports w.r.t investment ? Not an easy question to answer. Manish discusses about this in his Desigiri blog. My opinion is that Cricket is a game and most of the Olympic disciplines are sports. Generally entertainment quotient will be more for Games. What would people like to see on TV? Yuvraj scoring 6 sixes in a over OR Abhinav Bindra shooting a target from 10 meters ? So I feel there will be more viewers for Games and hence more investment. Also we have discussed several times ... why so many follow cricket in India ? because only 8-9 nations play cricket at professional level. Chances of India getting to top are more :) Same cannot said about Football where we are 150+ in FIFA ranking.

DNA factor in sports.
I was wondering about this for last few days. All finalists of 100 meters sprint were Afros! Is it something to with DNA ? My curiosity was quenched by an article which came in TOI yesterday. Some exceprts from it.
[source]
Not only DNA and physiology .. but also psychology matters.
The TOI article which I have referred above also mentions.
Gertrud Pfister, professor, department of exercise & sports, University of Copenhagen points out that even motivation, the way of thinking and orientation are important in determining performance. "In some societies, like India, with a more contemplative orientation, physical skills and sporting performance do not seem so important".
at Friday, August 22, 2008