Technology vs Money vs Artists vs Businessmen 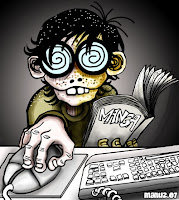 Posting about the technology saturation here and here in my blog made a lot of people curious about the discussion(s) in Ctrl-Esc-Boys group.

Today morning I got a mail from Aditya PK:
What is this Ctrl + Esc group that you mention in your blogs? It seems like a very interesting discussion board. Is it a mailing list? Can I join?

With warm regards we welcomed 'best outgoing student' of our class into our discussion thread and he added his gyan(thoughts) to two days old high intensity discussion.


Aditya's Response:
The whole discussion about technology vs money vs artists vs businessmen is a very interesting one. But I think they are all very very connected. You will find that the "artists", the people who are really passionate about software and are really good at it, are also the ones working on the best technology while simultaneously making the most amount of money. I may be a little biased because I work for google, :P, but it is true that people here are very very good at writing software, and they work on the coolest tech and also make the most money. I am also very certain that people who write software for free on sourceforge are highly-paid developers in their day-job.

The key to this, I think, is being really good at what you do. If you are so good at your job, then you will be producing a lot of work that is very valuable for the company, and the company will be willing to pay lots of money to keep you. I have a mini-theory about the connection between salary and the "artistic ability" of the person.

The salary that a company pays an employee has to be in a range. It has to be lesser than the amount of work that the employee produces. If the company is paying employee more than what he is producing, then the company is making a loss, and will fire the person. It also has to be more than the cost of the closest alternative. If the company pays less than the alternative, people will just switch jobs. For many people in the software industry, this number is measure by how much money the competition is paying.

So, if you want to increase your salary, there are two ways:
(1) The cost of the closest alternative goes up. This happens when the competition starts paying more, your salary also starts increasing.
(2) The value that you are adding to the company increases. If you do more productive and valuable work, then your worth to the company goes up, and your salary increases.

In the last 10 years, the salaries in Bangalore are primarily increasing because of (1). Other companies are paying more, so I should also get more. But if you rely on this, it is a very dangerous thing, because in a recession, when the competition is sinking, you are also very likely to sink.

It is my opinion that it is better to pursue (2). If you add more value to the company, they will, very happily, pay you more. There are many ways to do this, like getting a better education (Anyone did their MBA recently? :P). Another way is to become what Ritesh below called being an "artist". If you become really interested in what you are doing, the quality of the work you are doing automatically goes up, and you end up doing much better work. You can be a "businessman", just doing stuff because other people are making you do and because they are paying you, but this puts you in (1)... having to depend on the competition to make more money.

A couple of other observations about the discussion:
at Thursday, August 07, 2008