Chandrayaan's launch photograph was a relief on front page of newspapers in Korea, which was dominated by global economic crisis a few days prior to that. It was sort of proof that our scientists have done some stuff of international recognition. But being outside India, I was isolated from the last month developments of India's breakthrough space mission.

However, while watching CNN-IBN live stream on last Sunday(before the launch), I was fortunate to see a special 30 minutes program on the mission. It had all the important things from people involved with the project and also about the locations associated with the mission. In report they also mentioned about the place by name 'Bylalu' near Bangalore. I had come across this place earlier this year on the way to Machinbele Dam after Big Banyan Tree. At that time the monitoring center was under construction. It was looking like a high fundoo place because of presence of big dish antenna in the center. To quenched our curiosity we had got down from our bikes and had enquired about the place from a security guarding the place. 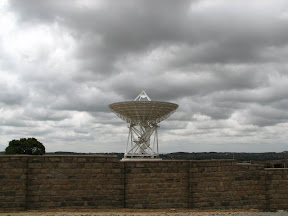 Also, in the same program, one of the scientists mentioned the reason Bylalu was shortlisted from a dozen villages by the ISRO scientists because of its saucer shape and a range of hills on the northern and southern sides to block radio frequency noise. Read more about the dish-village in a India-Today article.

There have been lot of discussion in the Indi blogosphere about Chardrayaan. Some bloggers have done live blogging too while doing countdown for the launch. The discussion were whether the program is really needed for a developing country. Some even dismissed the mission as an ego problem, since China is doing it, we also are doing it. Others say this heralds the 21st Century Cold war between India and China, as it had happened between US and USSR in 1960s.

One of the renowned bloggers Rashmi Bansal has mentioned in her blog that Chandrayaan's successful launch may inject craze among students to take up space science as career. Currently, the institute dedicated for space technology IIST may be preferred by toppers in JEE. Let's wait and watch for beginning of next academic year!