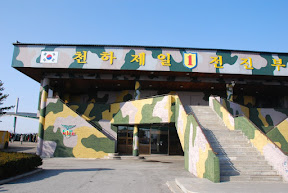 DMZ trip was one of my wanna do trips in Korea for long time. In my first visit to Korea since I was far away from Seoul in Gumi(Central Korea) there was hardly any chance to fulfill my wish. But staying at Seoul in seocnd Korean trip with enthusiastic buddies Santosh and Manoj the visit got materialized after a long wait .

What's DMZ:
After partition of Korean peninsula post 1950 war, the 38th parallel was marked as the border between two separated nations. The 2km region on either side border i.e. the 4 km strip is known as the DeMilitarized zone. In which there is no presence of armed forces.

Booking for a Conducted trip.
Due to security reasons private vehicles are not allowed inside DMZ. So for normal tourists the only way to visit the place is by a conducted tour. We booked for a trip by Seoul City Tour(cost 41000 won per head) with assistance from our Co-op residence reception. Since it was winter time we confirmed from the people who already had been to the place querying whether it is advisable to visit the place in winter.

Initial proceedings & the journey:
Morning 7.15 am we were picked up from Co-op in a small van. We were dropped to bus pick up point in front of a hotel near City Hall. In the bus we were greeted by bubbly and energetic tour guide Ms. Lee. After a brief overview about the trip from Lee , the journey started. Within 45 minutes we were near the border and our guide announced that there you can see the North Korea border, with some PJs (more about it later). 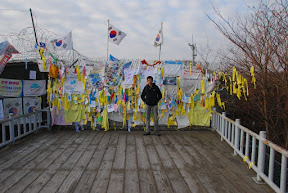 The first place we visited in the trip was Imjingak Park. It is an unification tourist spot developed after some summit. The major prominent feature of the place is the ‘Unification Bridge’ which was once the connecting medium between two nations. Now one can find banners and captions wishing for unification. Another prominent stuff at the place was static display of old steam engine parked a few meters away from the bridge. Before partition it used to carry people upto Pyongyang.

DMZ Theater and Exhibition Hall:
In the theater we were shown a short movie about DMZ. It was nice, crisp and informative movie. Below the theater there was an exhibition hall in which more stuffs related to DMZ were exhibited. In a short time allotted to see the exhibition one can give preference to bird’s eye view model of DMZ in which important locations are pin pointed. 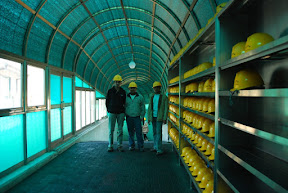 The tunnel is 75 meters under the ground and was made by North Korea once upon a time to invade South Korea. In dimensions the tunnel is 1635m in length, 2m in width and 2m in height. According to a captive North Korean engineer, there are 20 such tunnels. As of now only four of them have been discovered and the 3rd tunnel is largest among them. The process of discovering tunnels is a tedious process. It's is done by drillings the bores and simultaneously pumping water thru pipes.

Before entering the tunnel through a 200m slope one has to keep cameras in dedicated lockers(photography is prohibited inside the tunnel) and wear helmets kept on the racks. Initially we didn’t know the actual reason for wearing helmets but later we realized its importance as we were constantly banging our heads to ceiling of the tunnel.

Dora observatory:
The observatory is located within the DMZ and it's the northernmost point in the South Korea where one can see North Korea closest at hand. Hyundai’s Gaseong Industrial Complex can also be seen from the observatory. Other noticeable thing are flag-poles of the two nations on either side. South Korean flag pole is 100m high and North Korean one is 150m high! The major disappointment of the place was yellow photo line. Tourists are not supposed to take photographs beyond the photoline! One can hardly see the DMZ area staying within the photoline. 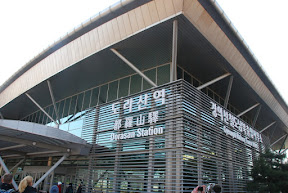 It is the northern most international station on Gyeong-ui railroad line, located about 700 meters from the Southern Boundary Line of DMZ. Currently in a day there are four trains from this station to Seoul. These trains are mostly used by people working at Gaseong Industrial Complex. If things go as planned i.e. connection between Dorasan and Trans-siberian railway thru North Korea, the Gateway of Interchange between two nations will become gateway to Europe. One will be able to travel to any European city from Seoul thru Dorasan. 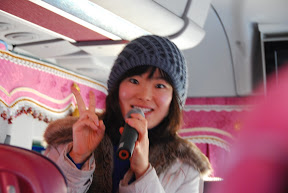 The major highlight of the trip was PJs and anecdotes by our tour guide Lee. Here are a few of them
Conclusion:
On the way back we got down at Itaewon. As a mark to end the trip we had lunch at Andhra-Arab style food at Foreign restaurant for 15000 won+ 1500 tax. It was an end of a nice short and sweet trip. Since it was a conducted trip, due to time constraints we could not see the places whole heartedly.