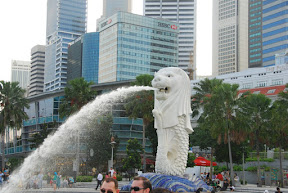 This is a trackback post on four day stopover trip in Singapore, while coming back from Seoul. The trip materialized because of generous hospitality of my high-school friend Ajay Bargur, who was staying at Singapore. This posting has been pending for a long time and have managed to post in this pre-ALP break.

Applying for the Visa: Unlike many SEA countries, Singapore doesn't provide visa-on-arrival to Indians. So, I had to apply for Visa in Seoul itself, at Singapore consulate(Seoul Financial Center). The process was pretty smooth. One of the important item to be furnished is contact address of your acquaintance staying at Singapore. For further details refer the link of Singapore Consulate - Seoul.

Places Visited
For Convenience Buy
Thursday Dec-18th, 2008: Onward Journey from Seoul
[ People who are looking for info related to Singapore only, can skip this para ]
It was time to say good-bye to Seoul, the biz-trip which was supposed to be for a month, (un)fortunately got extended to full visa validity duration. I chose to travel by evening flight as it would be convenient for Ajay to receive me when I land at Singapore in night. The check-in process took a lot of time, due to a long holiday queue. My luggage weight was just below 25 kg and there were no complaints from check-in staff. Then after exchanging Forex, I moved towards the security check. At the entrace, a lady stopped me and asked me to weigh my trolley suitcase. It was 13 kg ! The lady didn't allow me to proceed even after considering that my bag had a laptop and some text-books. She asked me to get an approval from the airlines. I immediately went to manager of check-in process and she asked her subordinate to weigh the bag. After looking at the weight of the bag which I had already checked-in and the lady responded that I have to pay fine, 14100 KRW per kg ! Well, I had no choice just to tell some stories that I had stayed in Seoul for 90 days, my luggage is full of winter clothes and also I was carrying some text-books. The conversation went on for five minutes, since the time was running out for boarding, the check-in counter staff after listening to my stories, printed a baggage tag and wrapped around handle of my suitcase and said it's check-in baggage now! After sigh of relief, I boarded the flight by carrying laptop in my hand. For major part of the journey, I was sleeping and was awake just to have genuine Indian Vegetarian food thousand miles above China Sea. Thumbs up to Singapore Airlines !

Arrival at Singapore:
The plane landed safely at Changi Airport and immigration process was smooth. Ajay was already present at arrival terminal to receive me. We took a taxi to his shared apartment at Chou Chu Kang. On the way we requested the taxi to stop at a 7-11 store. Since we took some time extra for buying fast-food items, the driver got frustated and started shouting on us. Suddenly I realised I am no longer in Korea, the behavior of driver was very contrast to polite taxi-drivers of Korea. We somehow managed to convince him and made him to wait for some more time. After reaching apartment, before going to sleep I had brief chat with Ajay's friends who were staying with him. 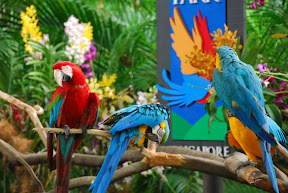 I got up late after having a deep sleep, by that time Ajay and his friends were ready to leave to their respective offices. Ajay gave me some suggestions about places I can explore in his absense. Firstly, I started my (re)search on Singapore. Found some good blog-links and later on noted down important points from wikipedia and wikitravel. Short-listed a few places and got some info about transport in Singapore , which was really helpful as I had to start exploring on my own.

I chose to visit Jurong Bird Park first. From Ajay's apartment I walked to Chou Chu Kang MRT station. Bought a EZ-link card for 15 SGD and took MRT to Boonlay with a changeover at Jurong East and from there I took Bus#194 to reach Jurong Bird park. For entry I took combo ticket 'bird park+zoo+night safari' for 40 SGD. The bird park turned out to be perfect place for photography. There are so many varieties of birds from different geographies. The major features of the park were Kite-show, Parrot paradise, Aviaries. More about the bird-park in a dedicated post.

Then after coming back to Boonlay station I bought a Singel SIM for 10 SGD, in order to have hassle-free communication. [It really made things easy for next three days]. Then I came back to Ajay's home at 7.00 pm and within half an hour he was also back from work. After taking a brief break we headed to Mustafa street in Little India by taxi to have genuine Indian food. Of all the hotels, we decided to have food at Sarvana Idly shop. Yummy Idlies and Dosas after a break of 3 months, priceless ! 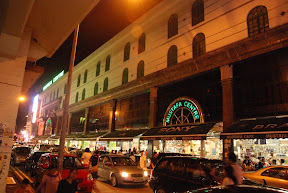 Later, we explored Mustafa shopping center. The market was essentially like National Market of Bangalore, fully congested and very less breathing space. Not sure how come such a shop is able to run legally in Singapore ? Some people say that the owner of the complex is very close friend of Prime Minister.

After doing a brief window shopping at Mustafa we decided to go Orchard Road to witness Christmas decoration. All the malls and shops were decorated with one common thing .. i.e. with a Christmas tree. The time was way past midnight and we decided to head back hom and took a Night Rider Bus which provides the glimpse of various prominent locations of Singapore. The major part of the ride I was dozing but Ajay used to wake me when some important stuff used to pass by. 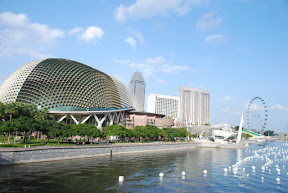 We got up late to recover from late night visit to Orchard Road. First went to have brunch at Food Court of Chou Chu Kang MRT mall. Surprisingly not even a single decent vegetarian dish available there. For a moment I felt Korea was far better than Singapore. It might be an "exceptional fallacy" as the Chou Chu Kang is mostly populated with people of Chinese origin. we started sightseeing with a visit to Esplande. After having photo session at terrace of Esplande we headed to signature of Singapore i.e. Merlion Statue. Next to statue there were a few tall building of financial district and also Hotel Fergusson, oldest hotel of Singapore which is wanna-stay place for many top-notch people. Then we had a Coffee break at Starbucks outlet near the statue. While having coffee Ajay showed me that the buildings under construction on other side of the bay are Casinos which are going to be functional by next-year. Truly tourism department of the country is trying all means to woo people. 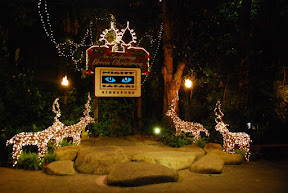 When the day reached the twilight phase, we decided to head towards Zoo for Night Safari and to be in time for night animals show. We took a MRT to Avai Kia Station from there to the zoo by Bus#138. First we witnessed night animal show which didn't like much (personally). It might be very entertaining for children. Then we took a tram ride for the Night Safari. I had to pay additional 10 SGD on top of my combo ticket for the ride. The safari ride was pretty decent but frustrating for people who prefer to take photographs as there won't be sufficient light to shoot. After night safari activities we had dinner at Indian Tandoor in the foodcourt. I had vegetable biriyani for 17 SGD, though expensive it was good enough to annul my afternoon's disappointment at food court of Chou-Chu-Kang Station. 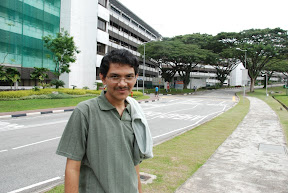 Ajay was occupied with some preparation for his work next day. I had no choice but to explore on my own and decided to meet my other friends and colleagues. First I met Yashas, my engineering classmate who was doing MS at NUS. He asked me to come to Clementi station. The temporary Singtel connection was a big boon to have seamless communication. We had lunch at some south-India Hotel near station. Then, Yashas took me to his PG room and from there to his university campus. After a brief photo session at the campus, I decided to move on and meet my colleague Sampath, who was in Singapore for biz-trip. From NUS campus, I took Bus#95 to Boono-Vista station. I took MRT to City Hall station and walked for 5 minutes to Carlton Hotel, the place where Sampath was staying. 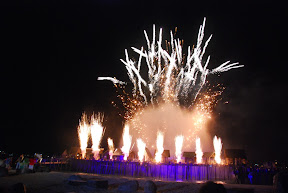 I forced Sampath to pre-empt his issue reproducing work and join me to visit Sentosa Island. Before leaving to Sentosa we made a brief visit to Sun-tech City Mall and took photographs here and there. For getting to Sentosa we took MRT to Marina Bay. The exit of the station directly took us into Vivo City Mall. We explored the mall, took some photographs in front of huge Christmas tree in terrace area of the mall. We bought some stuffs at 2$ shop. In the mean time, we really forgot that we were there at the place for visiting Sentosa ! Later we looked at options of getting to Senotosa from Vivo-mall. Of all the options we chose Sentosa Express, the ride is free with entry ticket of 3 SGD. In the same counter we bought tickets for 8.30 pm 'Song of the Sea' show for 8 SGD per head( 7.30 pm tickets were sold out !). Song the sea show was just awesome, brilliantly choreographed with usage of latest technologies. Later, after taking a few photographs in the park, we decided to get back to hotel. At City-Hall MRT station, we roamed around looking for a place to have food. Unfortunately none of the places we found proper vegetarian food. Then finally we decided to have some food at 24/7 McDonald. Even there was no option for vegetarian food. I ordered for a customized burger without meat. It wasn't stomach filling but was sufficient to keep me alive :). 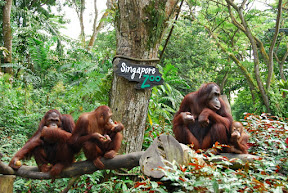 After staying overnight at Sampath's place, I left very early in morning to be in time before Ajay leaves to his office. After taking keys from Ajay, I started last leg of trip by visiting Singapore Zoo. I was not really keen visiting zoo again, since I had seen many animals in Night safari itself. But for utilizing my combo-ticket and take a few photographs of animals, I decided to carry on with the plan. There was a direct bus to the Zoo from Chou-Chu-Kang bus terminus itself. I explored the zoo in detail, read description of name plates and of course took photographs. The highlight of the visit was Orang-Utan feeding session, which happens everyday at 11 am. I had lunch at yet another food court, and had biriyani again and the price was around 8 SGD ( almost half of Night Safari food-court).

After Zoo visit, I thought of visiting some other place, but since I had to catch evening flight to Bangalore, so decided to terminate my sight-seeing and got back to Ajay's home. After packing things, I took a taxi to Airport. On the way I requested the taxi driver to go in front of Ajay's office, so that I can handover apartment-keys to him. The Taxi bill was 26 SGD, which included peak hour charges. The check-in process at the airport was smooth, thanks to co-operative Singapore Airline staff, who helped me to distribute my luggage weight properly, as airport officials were allowing only 8 kgs in the carry case. After doing some window shopping at duty-free shops, I boarded the flight, bringing curtains to short and sweet Singapore trip.