It's 11.30 am, and a hot sunny day in Bangalore. A middle-aged lady is rushing towards a marriage hall in an auto. She was looking forward to be in time for signature moment of the marriage i.e. Muhuratham. Unfortunately her ride gets delayed by five minutes .. thanks to ethical and obedient auto-driver, who comes to screeching halt at one of the busy signals en-route to destination, and refuses to jump the signal ! 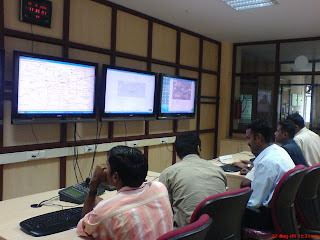 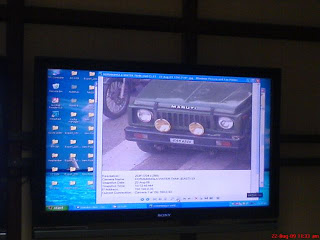 Surprisingly, the auto-wallah is telling plain truth ! This was confirmed, when I visited Bangalore's Traffic Management Center(TMC) at AshokNagar. The visit was conducted by members of Praja community - a citizen networking platform of Bangalore.

The upgraded TMC has all latest technologies to manage notorious traffic of the city.
- First is the traffic monitoring screen. It receives feeds through dedicated 4 Mbps lines from around 100 surveillance cameras placed at various junctions in the city. To zoom level of cameras is very efficient enough to read even number plates of vehicles. The registration number of vehicles standing beyond the stop line is noted by people at TMC and the notice is sent to the owners immediately. The feeds of the cameras are archieved upto 20 days and stored in 24 TB memory.
- Other salient features in center is usage of mobile density to make an rough estimate about traffic density. Next to it was a fault monitoring console, which provides real status about surveillance devices. In case of any fault, the automated system sends a SMS to concerned area manager.
- Enforcement cameras: There are five such cameras at critical locations, to capture most common traffic violation i.e. jumping the red signal. The cameras are sophisticated enough to freeze the motion, even at night time.
- The next section in the center is Traffic control system. Vehicle actuation system is main part of this system. On major junctions there's a magnetic loop plate placed below the road surface. The system runs with 4 second timer, when there's no activity, a notification is sent to system which appears on the dash of the control system. If the allocated quota of signal time is very high compared to used time, the controller can change the duration of the signal. The enhanced version of this system will based on video analytics, which will decide the signal duration by automatically counting number vehicles piled up.
- Signal Progression system: This is used to implement synchronized signals in series. The system has already been implemented at Devanahalli Airport Road Corridor and J.C. Road. A green signal at one junction means, green at every junction in the route. If timer at one junction updated based on vehicle actuation system, then the real time update is done at subsequent signals.
- Area Traffic Controller: It's a graphical tool developed jointly by Microsoft and BEL. The tool which is still in alpha-beta mode can be used to remotely monitor full traffic controls of junction. Signals can be switched off or can be put on blink mode etc.

Indeed a nice set of initiatives by authorities. All these solutions are implemented under consultancy of a multi-national firm. In fact the person who gave us the presentation was the consultant from the same company who had worked on implementation of the project. [ he had requested not to quote his name and the company].

Now, the question is this system sufficient to manage 24 lakhs vehciles ? Well, it's a good beginning and efficient+consistent monitoring and reporting by authorities will inject self-discipline into citizens to follow some basic traffic rules and thereby making life of other people comfortable.