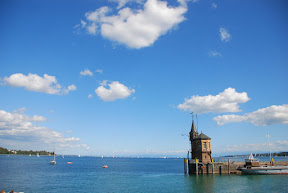 First weekend in Reutlingen, we(5S) were about to start off our very first brainstorming about places to visit, an obvious thing for a group of people staying in Europe, many options parceled with constraints. But the process was killed prematurely when the international office came up with a conducted tour to Lake Constance(Konstanz), locally known in Germany as Bodensee. The major significance of the lake is that it's more than 500 sq km and borders with Germany, Switzerland and Austria, also source of drinking water to nearby regions.

For the trip, the meeting point for students was Pestalozzistr in front of the university at 8 am, a very inconvenient place and time people who are staying in downtown dorms, especially on Saturdays when frequency of city-buses are very less.
We got up pretty early on that day(5-Sep-2009) which is unusual in a weekend ( I mean weekend for the real world, not as per SP-Jain standards). And took the 7:07am bus from Bismarkstr to Stadtmitte. At Stadtmitte we skipped 7:15 am in order to have breakfast Keim, as the next bus was at 7:30 am. Later, we realized that the decision to have breakfast at Stadtmitte itself was pretty wise one, as there was damn breakfast available in/near the University.

At the meeting point, we were twenty minutes before time, very unusual for typical Indians and waited for other international students staying in dormitories around the campus to join us. The journey started on dot at 8.00 am, in lines with typical Germany punctuality. The bus journey was sufficiently comfortable to overcome our sleep deficit. One of our German language teacher was giving commentary at regular intervals in mixed German-English. Her explanation revolved around how the typical german landscape, how the typical village looks like with a big church at the center and also she was pinpointing some landmarks here and there, one of them was Liechestine Castle which was on top of a hill next to the road in which we were traveling. 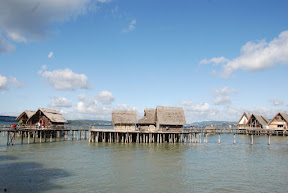 We reached our first destination Pfahlbaumuseum around 10.30 am. After getting down from the bus, from the parking lot we walked for 10 minutes to get to the museum. There was an initial briefing in English for 5-10 mintues, about the place, its significance. The major and the only highlight of the place was group of houses on stilt. Other than that, there was not much see at the place, especially from perspective of Indians. The mini museums inside houses were are not appealing to us, as we have seen several such places in India. For example there was one man enacting like a BC era human, which not very exiciting to us.

After finishing the museum visit, we explored the place for food. There were many small continental restaurants offering expensive food. Our search stopped at Turkish kebap corner which offered a nice Kebap for 3 EUR. It so filling that I didn’t feel hungry for very long time. 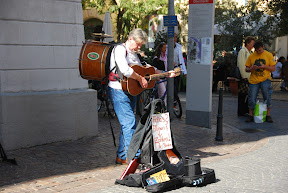 The next in line was ferrying on Lake Constance to reach Constance(Konstanz) town. It was really amusing travel in such a large body of fresh, clean water and experiencing cool but heavy breeze. After reaching banks of the town, we were again in the exploration mode. Artem from Ukraine who was one of photography enthusiast among international students, accompanied us in the exploration. First along with Artem I tried out some street photography. The town had typical feel of tourist destination, lots of people walking around in a casual mode, doing window shopping at shops on stree side shops. There was a street musician playing, who asked us to pay when we took his photo. After paying the musician, we continued our street photography, taking snaps market place, distinct buildings etc. Artem was very much particular about unique signs and logos on buildings. 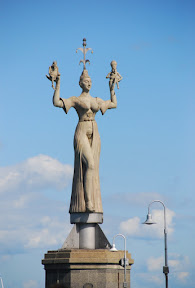 Moving randomly here and there we reached banks of the lake next to Imperia statue. At first glance, we get an impression that it is some ordinary statue. But, the statue depicts a prostitute who is holding Pope is one hand and king other hand. It has lot significance w.r.t history of the Constance(Konstanz tone). Read more at Wikipedia-Imperia Statue.

Our last destination in town exploration was the Cathedral. We climbed by steps to top of tower and witnessed breathing taking of the town, the lake and blurry alps mountain at a distance. Decent weather, blue sky with patches of white clothes made the view even more exciting and of courses from photography perspective. 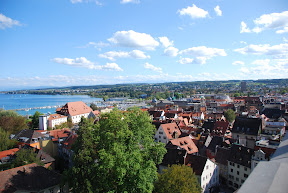 After spending some time on top of the tower we came to bus parking lot at 5 pm as per instruction. While returning to Reutlingen, myself and Artem( who was incidentally sitting in front of my seat), chose discuss about photography. Since Artem was looking forward to own an SLR, most part of discussion was fueled by him and his desire for ownership got multiplied after he witnessed the power of 50 mm lens.

The trip concluded, when bus dropped us back to Pestalozzistr. Kudos to the staff of International office for well organized trip, which had an investment of just 10 Euros per head!

Have look at more photographs in slideshow below.