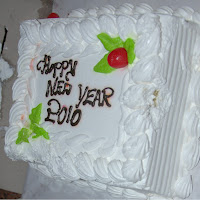 Happy New Year to all, if you are still wondering what's MMX in the title, it's just Roman numeral equivalent of the number 2010 !

The celebrations this year were not as adventurous like previous year's Skandagiri peak episode, however we had a get together and did some kind of celebration away from Bangalore.

The celebration started at Ankur's home where we decorated the house like celebrating a birthday with balloons and color paper tapes. After having dinner, we went to epicenter of Bangalore celebrations i.e. Brigade Road, MG Road area.

Then we made our entry into Vijay Mallya's UB City and expected the atmosphere to be electricity in the complex. But in contrast the environment inside was calm. There was some party going on inside Shiro Lounge Bar but the 7K price was beyond our budget. The year switch celebration was more or less mute in the place. There were some group of ladies enthusiastically wishing their dearest ones over phone and discussing about going towards airport. With their looks and context of their talk one could have easily made out that they were air-hostesses of the airline owned by Mallya.

After the year-switch we went to Coffee Day 24/7 outlet at Maddur which 65 kms from the city. The drive was bit exhaustive for Hemanth, as he was the lone driver in the group. The unpainted speed breakers made things more irritating. It was a big relief at when we saw red-n-white glow-sign boards on the right side of the highway around 2 AM. Surprisingly the place was still brimming with people, and many were still in celebration mode either yelling out wishes in air or dancing to the tunes played thru their car audio system. We became the part of the crowd with our formal celebration with cake cutting and having a cup of favorite coffee respectively.

At 3 AM, we decided to get back to Bangalore, to conclude our celebrations. While returning we chose to get back by NICE road which was literally nice too, as we could avoid notorious speed breakers on the Mysore Road.

That's the celebration this year, will definitely do something different next time. Share your celebration experiences too.